‘No, I don’t want to do Electric Picnic. I’m middle aged’

In a horrible vision, Patrick Freyne is visited by the Ghost of Electric Picnic Future

Stradbally is mud-free on day one of Electric Picnic as festival goers descend on the midlands village for this weekend’s festival. Video: Enda O'Dowd 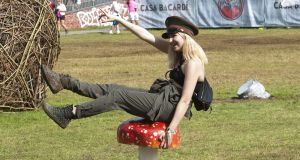 I awake in a swirl of mist and the Ghost of Electric Picnic Future is at the end of my bed pointing a tiny finger at me. He has taken the form of a toddler wearing ear protectors and wellies and he is sitting sullenly in a sort of party chariot.

“No!” I cry putting the pillow over my head. “I’m middle-aged. My time is over. Leave me here to die.”

“You have to!” says the spherical spectre. “Middle-aged people need Electric Picnic most of all because they have to stretch out their folds, I think. (I don’t know much about old people physiology because, as you can see, I’m a toddler in a disco wagon and my future is bright).”

“No,” says the sullen baby in ear protectors sternly. “Patfest 2000 is just you in your pants binge-watching Murder, She Wrote and eating olives from a jar. Frankly it’s depressing and we’ve all been meaning to talk to you about it.”

“Me and the readers,” says the Ghost, pointing at you lot.

“But but…” I say, but my words are drowned out by a credit sequence much like that of Buck Rogers in the 25th Century except featuring footage of me and the Ghost of Electric Picnic Future sitting on a manky bus to Stradbally and the words “Electric Picnic of the future!” being yelled through a tinny iPhone speaker over a loop of someone vomiting. The Ghost likes it. He’s snapping his fingers and singing along.

“It’s Ed Sheeran, actually,” says the ghost. “We have no place for your middle-eastern sun cults here … in the future.”

Then I am suddenly surrounded by oddly dressed young people, all of them on pogo-sticks. (“By the way, pogo-sticks are cool again,” says the ghost, “here in the future.”)

The young people are intrigued by my aged visage and they pogo around me to touch my face and marvel at the grey in my locks. “What is it?” they cry with joy.

“Foul phantasm, what visions are these?” I whisper.

“They’re just ‘peeps’,” shrugs the ghost. “That’s what we call ‘people’ in the future.”

One of the youths is wearing a monocle, a life preserver, a thong, one high heel and a clog. He is carrying a stuffed rabbit under his arm and has a massive ear trumpet protruding from his ear.

(“That’s what people dress like now,” whispers the ghost, “here in the future.”)

“Do you dig the hot new fads of this wondrous age, Grandad?” asks the youth.

“Well, everyone is raving about Steamed Monkey,” says the youth’s friend, who is wearing a tiny action-figure’s hat, washing up gloves, huge MC Hammer trousers, a handlebar moustache, a bikini top and diving flippers.

“Steamed Monkey? Is … is that a band or some sort of foodstuff?” I say.

“It certainly is,” she says, nudging her friend approvingly. “He knows what’s what.”

I am, at this stage, curled up in the foetal position muttering my safe words (‘NME magazine with Suede on the cover, circa 1993’)

“He’s very funny,” chuckles the Ghost, his chubby cheeks quivering. “That’s like his catchphrase.” He mimics me. “ ‘I’M SO CONFUSED.’ Seriously, he yells that all that time.”

“But is he okay?” asks the man with the monocle, stuffed rabbit, ear trumpet and thong, tapping me gently with the toe of his stiletto. I am, at this stage, curled up in the foetal position muttering my safe words (“NME magazine with Suede on the cover, circa 1993”).

“Oh, he’s perfectly fine,” says the ghost. “I’ll take him somewhere he’ll be more at home. Thank you for all your help, Officer.”

The Ghost gets out of his party chariot and they help put me into it, and he drags me to some makeshift walls comprising pallets and debris. The walls are enclosing some sort of compound. “Safe zone” is spray painted on the wall.

“Who goes there?” cries a woman from atop the barricades.

“I’ve one of your lot here!” shouts the Ghost.

The gates swing open and I am greeted by a throng of people holding paper cups of coffees in their hands and newspapers under their arms. The men all have beards. The women all have bobs. Every second person is ringing their parents to make sure the kids are okay. At the centre is their leader, the woman from the barricades. She is wearing long swirling robes, a wizard’s hat and is holding a staff with a glowing orb on the top. She looks at my eyes. “He’s overstimulated,” she says. “Get him a Sunday supplement and a glass of craft ale, stat.”

“I am Miriam O’Callaghan, and even in the far future, I am still the voice of reason. I’m here to discuss the far FAR future of the arts in a panel discussion featuring Blindboy Boatclub, Amanda Brunker, Socky and someone from the Iona Institute. ”

“You’re safe now, son,” says Miriam. “That’s all you need to know. So, would you like to attend an event about Irish identity in an era of populist uncertainty? Or would you like to know how Brexit is affecting the indigenous cheese industry?”

“We call it Mindfield,” says Miriam.

The Ghost of Electric Picnic Future begins to laugh. “One of us, one of us,” chant the middle-aged festivalgoers, occasionally breaking off to upload photos of their food and tweet self-righteously about presidential candidates or cultural appropriation or traffic-calming measures or Steamed Monkey.

“No!” I cry. “Take me from this place, Ghost.” I grip the Ghost’s party chariot, but he’s an infant, so he’s been distracted by some keys and is rolling away. Miriam O’Callaghan has a hold on my other arm. In the struggle she drops her newspaper and I spy the date. It’s September 2017. This isn’t a vision of the future – it’s my actual memory of last year’s Electric Picnic. Oh yeah, I remember this now. I realise, at last, that the future is here and that I don’t understand modern culture and I never will again.

“Finally!” says the Ghost, who, it turns out, is just my nephew who never tires of tormenting me.

Patrick Freyne is not going to Electric Picnic for the first time in six years. He has other plans (see: “Patfest 2000”)