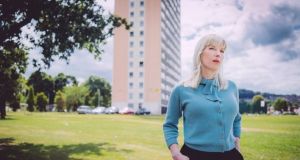 Wendy Erskine: “I am always taken by the relative strangeness of other people’s homes.” Photograph: Khara Pringle

There’s no place like home? There are, in fact, many. Witness the crowded bar where people are singing along to Country Roads. They’re in Athlone, or Lisburn, or Broughshane, but they ask to be taken home to the place where they belong, which is West Virginia. Or maybe Sweet Home Alabama is where they long to be. Lord, they will be coming home to those blue skies and their warm and welcoming kin.

Lynyrd Skynyrd’s 1974 song Sweet Home Alabama, written in response to Neil Young’s Southern Man and Alabama which dealt with the racism of the American South, asserts that “old Neil” or “Mr Young”, as he is variously addressed, has misunderstood the place, the home to which people yearn to return even if they’ve never been there.

For many, however, Alabama was not the mythic motherland. In 1963 the governor George Wallace was famously photographed preventing two new black students from entering the state university and in the same year white supremacists bombed the 16th Street Baptist Church in Birmingham, Alabama, killing four women.

The singer Merry Clayton was asked to provide backing vocals on Sweet Home Alabama. “It’s not sweet home to black people. It’s not sweet home at all,” were her thoughts at the time, later told to Dorian Lynskey in the Guardian. When it came to their part, she and the other backing vocalists were going to “sing it like a protest song”.

As this complex song of pride, warmth and anger suggests, there is rarely unalloyed sweetness. In any place there will be competing narratives and voices, not to mention those who don’t get a chance to speak at all: the silent, or the silenced.

The ageing rock and roll casualty, the young man who had a religious conversion on a stag night, the lovesick old teacher with her dog – walk the same connecting streets

My short story collection is set in Northern Ireland in the present. Northern Ireland with its burgeoning creative industries, beautiful countryside, tourist boom and giddy pride in its golfers, footballers and music stars, its record shop impresarios.

Northern Ireland with its sectarian myopia, highest rate of suicide in the UK, 90 per cent segregated social housing on religious grounds and rejection of same-sex marriage. The collection is called Sweet Home and taken in its totality, like the song, offers neither damnation nor elevation of place.

Sweet Home takes place in east Belfast, a traditionally Protestant, working-class area dominated by the cranes of the Harland and Wolff shipyard. In Alasdair Gray’s Lanark, the character Duncan Thaw asks what a city, in his case Glasgow, means to most people.

It’s “a house, the place we work, a football park or golf course, some pubs, and connecting streets”.

In my stories I very rarely ventured beyond a similarly circumscribed world of shops and community centres, health centres, beauty salons, church-run cafes, doctors’ waiting rooms, all located on a handful of streets running off one arterial road. This suited me because it’s the area I call home and I didn’t want to do any research that the inclusion of more far-flung locales might necessitate.

The Duncan Thaw-endorsed notion of city limits helped provide the collection with a kind of cohesion but it also reinforces how radically different individuals – the ageing rock and roll casualty, the young man who had a religious conversion on a stag night, the lovesick old teacher with her dog – walk the same connecting streets.

There is a great description that the writer Gordon Burn used to describe the practice of his friend the artist George Shaw, who paints graffitied garages, scrubby parkland, goal posts and swings in the local park. (One of my favourite paintings of his is of a council house, neat and net curtained with a cherry blossom beside it. It is both mundane and beautiful, neat and riotous.) Burn imagined Shaw “painting the back room of the social club in Tile Hill with all the seriousness of Monet painting Rouen Cathedral”. The social club is an environment, it would seem, deserving as much care and attention as anything else.

Burn’s observation is something I have borne in mind when writing. If the back room must be taken seriously then so must the man washing the dishes in the café, the woman cleaning the toilet in the architect’s house. This is hardly radical. It’s a basic tenet of social realist writing, whether experimental or traditional.

But it’s still worth remembering that the mid-life crisis of the aristocratic author in a grand hotel in Venice is in essence no different to the woman who experiences the same in a tanning salon. The heroin addict who dies in the shop doorway is no less tragic than the one who dies in a Knightsbridge mansion. I may enjoy the eloquent writing of the person who frames his or her experience through reference to continental philosophy but someone on the Jeremy Kyle Show has no less intensity of feeling.

People stake out their own territory: their own place where they sit down to work, their particular seat in the garden, their chair in front of the TV

Closer still, the collection is about what happens in people’s houses. Sweet Home: it could be the words on a doormat where you wipe your feet as you cross the threshold. I am always taken by the relative strangeness of other people’s homes, that bulldog clip of bills in the kitchen, the pile of shoes at the door, how some have no music and others no knick-knacks, how the anarchy of a teenage bedroom disrupts the palette of beige in the hall and landing. Homes, semi-autonomous statelets, with their own governors, their own renegades.

The average front door is 36 inches by 80 inches. In Species of Spaces, Georges Perec observes the totemic quality of this portal: "We protect ourselves, we barricade ourselves in. Doors stop and separate . . . You have to have the password, have to cross the threshold, have to show your credentials."

In the stories of my collection people stand at their doors uneasily, unsure whether or not to grant someone admittance. A lonely young man and his fragile alcoholic boss tumble drunk through the door at the beginning of a short and sad affair. A woman buys a new lock for her front door so that she can keep her mother out.

People stake out their own territory: their own place where they sit down to work, their particular seat in the garden, their chair in front of the TV. (All of Sweet Home was written while I sat on the same seat at the kitchen table, my back against the radiator.) Children insist that their parents knock before they enter their rooms.

And yet despite our attempts at atomised space, if we share our home with others it is impossible, even for a second, ever really to escape them: “Fibres from jumpers, flakes of skin, tiny particles of paper, the white dust of dry shampoo, the icing sugar from the buns they ate one time, all moving slowly in the narrow beam of morning light between the curtains. The house was full of the stuff and they all bathed in it.”

Sweet Home by Wendy Erskine is published by The Stinging Fly Press on September 11th. Launch events take place on September 7th in The American Bar in Belfast, and September 19th in Hodges Figgis, Dublin