Astroturf by Matthew Sperling: A brawn cocktail that nails the zeitgeist

Review: This tense debut about steroid abuse is very much of the moment 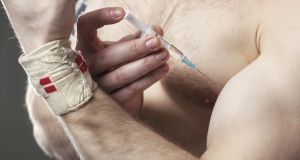 “‘It’s as satisfying to me as coming is, you know, as having sex with a woman and coming. So can you believe how much I am in heaven? I am getting the feeling of coming in the gym; I am getting the feeling of coming at home … So I am coming day and night. I mean, it’s terrific, right?” Arnold Schwarzenegger, future governor of California, describes the pleasure he derives from professional weightlifting in the acclaimed 1970s docudrama Pumping Iron.

The Schwarzenegger quote finds its way into Matthew Sperling’s debut novel, Astroturf. “Better than sex” is a cliche that’s used to sell everything from low-calorie yogurts to scented shampoos, but in the novel’s fascinating world of bodybuilding, the superlative rings true. Centred on a 30-year-old London programmer’s foray into steroids, the story is as much about desire and physicality as any cheap paperback romance. It’s a thrilling world to delve into, told in stark prose, as taut as the muscles protagonist Ned finds himself with after only a few weeks of “pinning”.

To the uninitiated, pinning is the process of injecting your quad muscles with steroids bought illegally online, a 12-week cycle that leaves Ned physically and mentally pumped: “As he walked to work, his mind felt lucid and free of anxiety. He wanted to see people, to experience the city, and he felt in harmony with its rhythms. His steps felt light, his feet springing up from the pavement. He couldn’t say what was different, except that he felt present in his body in a way he hadn’t before.”

Sperling’s descriptions are precise and visceral when it comes to the details of injecting. Baulking at the prospect of sticking a needle through an inch and a half of sinew and muscle, Ned remembers a previous visit to his GP when “the doctor had just darted it in, with no more difficulty than if he were pushing a cocktail stick into a cherry tomato”.

After the first pinning, Ned takes to it with ease, encouraged by his dim-witted personal trainer, Darus, to maximise the effects of the drugs with sessions that push him to his very limits and leave him feeling euphoric in the aftermath.

Taking in everything from Bitcoin to 4chan, Astroturf is very much a zeitgeist novel in the vein of Luke Tredget’s Kismet or Lottie Moggach’s excellent debut from a few years back, Kiss Me First. The latter has recently been adapted for TV, and it is unsurprising to read that Sperling’s novel has also been optioned. The English author has written a clever and well-paced morality tale for the modern age, full of stakes and turning points.

The question of ethics is explored in a plot twist that moves beyond Ned’s own personal use. Having so clearly benefited from the drugs – including the acquisition of a new, shinier model of girlfriend than the ex who dumped him – it is shocking that Ned’s next move is to exploit his newfound community. Learning from Darus how easy it is to sell fake drugs online, largely due to the fact that buyers of illegal substances have no recourse, he sets up shop in his basement flat and amasses nearly £70,000 within a few short months. The crafty ingenuity of how he does this – by creating hundreds of sock puppets on forums who talk up the fake drugs – makes him feel like an artist: “He was surprised by his imaginative reach, the authenticity of detail that gave his identities the ring of truth.” In a deadpan tone that relates the adventures and misadventures, Sperling leaves it to the reader to pass judgment on a man who preys on the vulnerability and vanity of his peers to line his own pockets.

Sperling is a lecturer in English literature at University College London. His fiction and poetry has been published in the New Statesman, 3:AM, the Junket and Best British Short Stories 2015. The caustic economy of his writing suits the subject matter of Astroturf. Themes of warped masculinity, identity, survival and the pursuit of perfection are all vividly rendered in the novel.

Even the book’s title is a zeitgeist term, referring to fake support for a product or cause, often created online using sock puppets or bots. In Astroturf, Sperling pumps his characters full of unrealistic expectations and sits back to watch what happens when real life puts a pin in it.