Neil Young and Daryl Hannah reported to have married 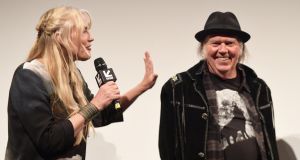 The Canadian singer-songwriter Neil Young and the Hollywood actor Daryl Hannah are reported to have married in California on Saturday.

The ceremony took place in front of close friends in Atascadero, near the coast between San Francisco and Los Angeles, after another ceremony aboard Young’s yacht in the San Juan Islands, off Washington State, according to the Daily Mirror.

The guitarist Mark Miller appeared to confirm the news on Facebook, writing: “Congratulations to Daryl Hannah and Neil Young on their wedding today. May they have a long and happy relationship.”

someone’s watching over us.... love & only love

Hannah then posted a photograph of a white owl on Instagram with the caption; “Someone’s watching over us.... love & only love.”

The pair have been together since 2014, when Young, whose best-known albums include After the Gold Rush and Harvest Moon, filed for divorce from his wife of 36 years, Pegi.

Hannah is best known for her roles in Blade Runner, Splash and, more recently, the Netflix series Sense8. She also recently directed Young in the streaming platform’s film Paradox.