The Silence of the Girls by Pat Barker: a stunning new novel 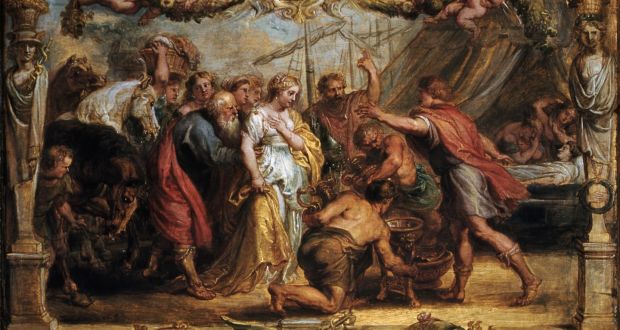 What war does to women: Briseis Given Back to Achilles by Peter Paul Rubens. Photograph: by Barney Burstein/ Corbis/VCG via Getty Images

Book Title:
The Silence of the Girls

“It’s always hard on women, when a city falls.” Briseis, former princess of the Trojan city of Lyrnessus, has been Achilles’s slave for several months when someone she knew in her old life says these words. From the ancient world to 20th-century Berlin, from the Balkans in the 1990s to 21st-century Nigeria, women’s bodies have always been viewed as the spoils of conflicts waged by men. In her stunning new novel, Pat Barker goes back to one of the most famous wars of all, telling the story of the siege of Troy from the point of view of the local women taken by the Greek forces.

The beautiful Briseis plays a crucial role in the Iliad; much of the epic tale’s drama stems from the fallout of Agamemnon’s insistence on taking her from Achilles after his own war prize, Chryseis, is returned to her family. Unsurprisingly, Homer wasn’t particularly interested in how Briseis and the other women seized by the Greek forces felt about all this. But Barker is. “Great Achilles. Brilliant Achilles, shining Achilles, godlike Achilles…” says Briseis in the book’s opening page. “We never called him any of these things; we called him ‘the butcher’.”

When her city falls, Briseis witnesses Achilles kill her husband, her brothers and all the other men in Lyrnessus before the city’s female survivors are taken across to the Greek encampment, where they are shared out among the men. And so begins Briseis’s struggle to hold on to a sense of self in a place where everything that used to define her has been stripped away.

The Silence of the Girls is the second book this year to offer a fresh perspective on Homeric women, following Madeleine Miller’s brilliant Circe. But while Miller’s reinvention of literature’s first witch brilliantly evoked a world of ancient magic, Barker’s story has its feet very firmly on the ground. Yes, the gods are still there – you can’t tell the story of the Trojan wars without them, after all. Apollo still sends a plague, Achilles is the son of a sea goddess who brings him divinely forged armour and Hector’s body is magically restored to freshness after being pulled behind Achilles’s chariot.

But this divine intervention always feels like it’s happening to real people, because it all takes place in a convincingly grubby, brutal Bronze Age world. Barker’s language is fresh and brisk, especially the dialogue; thankfully, she makes no attempt to adopt a faux-archaic “mythic” style (after all, if you’re not going to write in Ancient Greek, why bother? It’s not going to be authentic one way or another).

The first night Briseis waits on Achilles and his men, the Myrmidons greet their leader with a chorus of the 20th century drinking song Why was he born so beautiful? It’s a brilliant, thrilling jolt to the reader, setting the tone for a book that somehow manages to evoke the familiar and the utterly alien with equally convincing intensity. The characters are products of their distant time. They take both slavery and human sacrifice for granted; these things aren’t seen as right or wrong, they just are. The men are not all brutal – Briseis comes to genuinely care for the kindly Patroclus. But not even the most decent of them would ever consider challenging the system, or thinking it might need to be challenged.

The women’s fear and the fierce anger that smoulders beneath it, however, feels both ancient and modern, as does Briseis’s need to hold on to her own personhood. When Patroclus tells her he could persuade Achilles to marry her, she feels repulsed by the thought of marrying the man who killed her family. But then she admits, “I was a slave, and a slave will do anything, anything at all, to stop being a thing and become a person again.” Even though the Greeks refuse to see the women’s humanity, they maintain that humanity in each other. “It seems incredible to me now, looking back, that we laughed,” says Briseis. “But we often did.”

Barker’s experience of writing about military life in her earlier novels shines through in the depiction of the Greek forces; in the second part of the book, we begin to see the events from Achilles’s point of view, the “tedious, bloody grind” and “shining moment[s] when the din of battle fades and your body’s a rod connecting earth and sky”. The men are dehumanized by the wars they have created. This is primarily a book about what war does to women, but Barker examines what it does to men too. Angry, thoughtful, sad, deeply humane and compulsively readable, The Silence of the Girls shows that 36 years after her first novel was published, Barker is a writer at the peak of her powers.