Beck: ‘U2 had the best audiences of anyone I’ve opened for’ 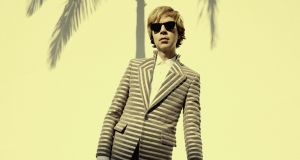 Beck: “It would be very easy to come along and make something deliciously krautrock, or hide in the safety of the familiar.”

If there was ever a musician who is capable of whipping something novel out of the unexpected, it’s Beck Hansen. The Californian has spent his career ducking, diving, slicing, dicing, spinning, sliding and dancing his way through the musical landscape; a dash of theatricality here, a dose of solemnity there.

On some albums, like 2003’s Sea Change he slunk out of the shadows with a collection of the most heartbreaking acoustic songs ever committed to tape. On others, like Midnite Vultures, Odelay or The Information, funk, pop, hip-hop and rock were unleashed with wild abandon.

Along the way, he has picked up every plaudit going (there is a separate Wikipedia page for Lists of Awards and Nominations received by Beck), had a song that defined a musical era (Loser) and worked with everyone from The Chemical Brothers to Lady Gaga to Jack White to Philip Glass. It’s safe to say that you never quite know what you’re going to get with a Beck album.

“The thing with me is, I’m not necessarily going in to record a record anymore,” he explains from his LA home. “I’m just always making music. And a body of songs starts to take shape and emerge, and there’s a kind of unexplainable connection with the songs, even when I’m working with different people. And that’s what happened here; I started to realise ‘Oh, this song I did with Greg fits right in with these other songs I’m doing with Pharrell’. That’s kind of how it happened. I’m working on all kinds of music, but it’s like the ocean; a certain wave starts to form, and you go ‘Oh, look at that wave coming – let’s take that one!’”

The aforementioned Pharrell Williams, who co-wrote and co-produced seven of the album’s eleven tracks, had a heavy hand in shaping Hyperspace. Having first met in 2012 – when a collaboration was first mooted before Williams’ went global with Get Lucky – Beck later reached out to the NERD man. And no, there was no bad blood between them after Morning Phase beat G I R L to the Album of the Year Grammy in 2015.

“It’s been a process,” Beck says, explaining how their working relationship eventually materialised. “I think we have similarities in the way we work. We’re both very much ‘in the moment’, looking for that spontaneous spark; walking around with the melodies and putting things down while it’s in motion. Letting the creative process be very spontaneous, and having a certain energy in the studio, where you’re trying to discover something.”

Williams’s energy and influence can keenly be heard on songs like the slick electro-hip-hop of Saw Lightning.

A lot of the tracks were written first, and I had to find the voice for them

“He has a great electricity and a feeling of powerful positivity to go in a certain direction,” Beck says. “And it might be a place I never thought to go. I think about Prince, and I think about The Beatles, even – how they went to India and came back with a whole new perspective on music. Or Bowie went to Philly and started making soul music. There’s always something to be said about going into a different place and seeing what emerges.”

Lyrically, there are some deeply personal songs on Hyperspace. Having filed for divorce from actress Marissa Ribisi, his wife of almost 15 years, earlier this year, he sidesteps the question about whether certain songs are about that situation. With lines like, “time moves on and on and love it goes/Now she’s gone and all I see are shadows” on Dark Places, however, you imagine that it was in the mix. Unlike the aforementioned Sea Change album – one of the great break-up albums in music, written after the end of a seven-year relationship – a sense of melancholy does not dominate this album’s tracklist.

“I was just trying to channel the mood of the music,” he explains. “A lot of the tracks were written first, and I had to find the voice for them – which is a much more difficult job. It was the same on Colours as well – we made the music first and I had to find the voice for the music. I write songs in bed, I write them in the car, just everywhere. It’s a bit like speaking in tongues; sometimes you just get on the mic and phrases just start coming out, and a portrait of a person or a place starts to emerge from the words.”

He cites the song Stratosphere as an example of that “subconscious writing” style.

“I was just writing, and the line, ‘turn me around, collision course with the sun’ – like someone is flying their ship into the sun into certain destruction,” he says. “I’m not sure what that was, but I followed the thread and soon enough, it was about a friend of mine who OD’d years and years ago, and I would think about him every so often. I never really knew how to write a song about it, or how to approach it in a way that felt unforced, and coming from a place that made sense and felt true to how I knew him. And that song Stratosphere kind of came out about him – but I’m not sure why.”

Other recent pursuits, whether it had an impact on his writing or not, included appearing as U2’s opening act on their Joshua Tree tour several years ago.

“It was a great experience,” he enthuses.

“I’ve known them for years, and they’ve always been very generous and kind to me. They make you feel like you’re peers; they listen to you and take time, which is very unusual for somebody of their level of success. It was the kind of thing where they could have invited anybody, so it did feel special to be included.

“I have to say, for people that I’ve opened for, they had the best audiences: they were so kind and open to us, and gave back so much. And also, getting to live out any kind of fantasy you had of playing stadiums was very cool,” he laughs. “It was like, maybe if you’re used to walking everywhere you go, suddenly you’re in a jumbo jet flying over the world and just taking in the vastness of the view.”

In many ways, the Beck that released commercial breakthrough Mellow Gold in 1994 seems like a million miles from the 49-year-old Beck who is releasing Hyperspace. In some strange way, it’s also easy to thread a line between those two albums, albeit with a few kinks, knots and frayed ends along the way.

“They’re very different, sonically – but I think they’re very much the same because it’s the same ethos of embracing your environment and your time, and getting your hands dirty and seeing what you can make,” he argues. “As much as The Beatles loved Buddy Holly and Little Richard, they were also being influenced by The Supremes and Jimi Hendrix and Captain Beefheart, and everything that was happening with it. So I think it’s important to engage with the time.”

I love organic instruments. But it’s undeniable that we live our lives through digital phones

Perhaps that’s why, 14 albums deep into his career, Beck remains a towering figure in modern music; quietly influential yet unafraid to take risks despite his “critical darling” status. It is, he says, all about embracing change, rolling with it and seeing what happens.

“This was a very digital album – purposefully so,” he nods. “I feel like we are in the digital age. I love organic instruments: orchestras and acoustic guitars and voices. But it’s undeniable that we live our lives through digital phones; our information is digital, and the whole wave of modern music is music created on computers, on laptops. And I wanted to embrace that with the sound of this record: let’s make something with the vernacular of the time, let’s make art out of it. Let’s not necessarily ride the train of trend, but let’s use the lingua franca, let’s use the coin of the realm, and see what interesting artefacts we can make out of it.

“To me, these songs, hopefully live in the now. It would be very easy to come along and make something deliciously krautrock, or hide in the safety of the familiar,” he adds. “But there’s something scary about this new digital sound. We may have to sacrifice something else for it, but it’s inevitable, it’s here: let’s make something with it.”

Hyperspace is released on November 22nd.