What is it that opera traditionalists want exactly?

It has become clear over the years that whatever it is they like, they call it traditional 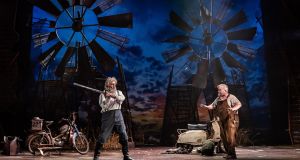 Orpha Phelan’s Irish National Opera production of Rossini’s La Cenerentola left me with an odd question when I saw it last Saturday. What is a traditional opera production?

The connection between the production and the question is probably not immediately obvious. Phelan’s La Cenerentola, with clever, witty and sometimes spectacular designs by Nicky Shaw, is steeped in the world of fairy tales. The first act set is a pop-up story book that flattens into a carriage to carry Cenerentola off to the ball. The second act has an Alice in Wonderland feel, with giant books towering over the human love story being played out below.

What’s not to like? Well, nothing really. And Saturday’s audience seemed to love it, with various individual touches – Cenerentola’s head appearing unexpectedly in the window of the carriage and the reveal of the giant books – exciting especial delight.

But the production is on the stage of the Bord Gáis Energy Theatre and, over the years, some of the advertising campaigns for operas in that venue have harped on the apparent virtue that the productions are traditional.

That’s what led me to the question about traditional opera productions, and then to another question. When did I last actually see a traditional production? The answer is surprising. I haven’t managed to see every single opera production in Ireland this year. But four of the ones I did get to would have to be described as traditional.

I think we can assume the description “traditional” is intended to mean that the period and location as originally envisaged by the composer and librettist have been dutifully observed. That the plot has not been changed. That anachronisms have been avoided. It’s not at all clear, though, if traditionalists require every single scene change to be observed, as might have been the case at the first performance.

That’s a tall order, but not an impossible one. The conductor Alan Curtis was proud of the fact that his 1985 Wexford Festival Opera production of Handel’s Ariodante (directed by Guus Mostart and with Bernadette Greevy in the title role) respected all the scene changes as Handel had conceived them.

The two baroque operas I saw this year were both by Vivaldi. Tom Creed directed Griselda for Irish National Opera and, with often seedy designs by Katie Davenport, updated the setting to a contemporary surveillance state. It was a touring production, so it was unlikely that the budget would ever have risen to an opening in “A magnificent hall in the Royal Palace for public hearings. Gualtiero on the throne and a crowd of people.”

The opening scene of Vivaldi’s Dorilla in Tempe, directed in Wexford by Fabio Ceresa with designs by Massimo Checchetto, had a stately home splendour, but did not literally offer “A delightful panorama of hills and flowery countryside”.

Also in Wexford, Rodula Gaitanou updated Massenet’s Don Quichotte to a 20th century with mopeds and scooters, and a huge wedding cake took the place of the gardens of the seraglio at the opening of Rosetta Cucchi’s production of Rossini’s Adina. For INO Ben Barnes updated Puccini’s Madama Butterfly to a war-torn Vietnam, and Caroline Staunton set Mozart’s The Magic Flute in late 19th-century Ireland.

But I did say I actually saw four traditional productions. They were all new or recent works. Caitriona McLaughlin’s production of Stephen McNeff’s Banished was performed in the round in Kilmainham Gaol by students from the Royal Irish Academy of Music. INO’s video-rich production of Brian Irvine and Netia Jones’s Least Like the Other, was directed by Jones at the Galway International Arts Festival. And McLaughlin’s production of Evangelia Rigaki’s This Hostel Life, from the same company, was atmospherically spread around the crypt of Dublin’s Christ Church Cathedral. Rosetta Cucchi wrote the libretto and directed Andrew Synnott’s La Cucina at Wexford – the work conceived as a curtain raiser for Adina and centred on the baking of the cake that would dominate the stage in the Rossini.

All four had the direct involvement of the composers.

How much more authentic can you get? How much closer to a tradition could you find yourself than when it’s at its point of origin? Who wouldn’t want to see and hear The Magic Flute or an opera by Vivaldi exactly as the composers themselves did?

Well, when it comes to traditionalists and opera, it’s not the operas of today that get them excited, but mostly the operas of the tradition that died out with Puccini’s Turandot in the 1920s.

Over the years I’ve had many opportunities to question people gently about their personal identification and tastes in operas and opera productions. And it turns out that traditionalists don’t like only traditional productions. Whatever it is they like, they just call it traditional, and vice versa.

It all reminds me of someone who cooked for the family while she was still living with her parents. Her father had a number of quirks, one of which was an aversion to garlic. But whenever he ate a dish with garlic in it, he seemed to love it. A case of what you don’t know won’t hurt you.