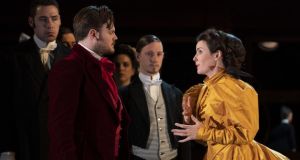 National Opera House, Wexford
★★★★☆
With the lights dimmed but the curtain yet to rise on the opening night of Irish National Opera’s new production of The Magic Flute, and no hint yet of how this classic would be told this time, there was just Mozart’s music.

No one better to pen an overture bursting with excitement, high spirits and promise. And the conductor and Baroque specialist Peter Whelan maximised its impact of delight, drawing from the Irish Chamber Orchestra the kind of crisp, zesty energy associated with period performance. It riveted you, and you sat there thinking, This feels like it’s going to be very good.

And it was. Whelan and his players maintained their vivid Mozart throughout, lithely partnering the singing, antics and moralising on stage. The soprano Anna Devin led a young, well-matched ensemble, capping her turn as the damsel in distress with a touching, unfussy performance of Pamina’s act-two lament (“Ach, ich fühl’s”) as she misconstrues Prince Tamino’s refusal to speak. He is, of course, the wimpiest hero in all opera, presenting tenors with a peculiar challenge, met here with grace and a warm lyricism by Nick Pritchard.

In Sarastro’s famously low notes, and in the even more famous high, acrobatic ones for the soprano in the Queen of the Night’s show-stopping aria, Lukas Jakobski and Kim Sheehan both gave good accounts, satisfying and fearless

The prince – and indeed everyone else – is dwarfed by the towering presence of Sarastro, the high priest, brought to life by the 198cm (6ft 6in) Polish bass Lukas Jakobski, as though the prince’s trial by ordeal were under the exacting supervision of Paul O’Connell.

In the part’s famously low notes, and in the even more famous high, acrobatic ones for the soprano Kim Sheehan in the Queen of the Night’s show-stopping aria, both singers gave good accounts, satisfying and fearless.

The Magic Flute’s most relatable and endearing character is the prince’s lovelorn sidekick, Papageno, played with very funny but precisely judged comic understatement by Gavan Ring in his farewell to the baritone range as he now switches to tenor.

In keeping with its objectives, INO assigned most other parts to Irish singers, some still establishing a foothold, others – such as the Berlin-based Padraic Rowan, as the Speaker – invited home from careers abroad.

As director, Caroline Staunton – with the abstracted Victorian designs of Ciaran Bagnall and costumes of Katie Davenport – firmly though subtly asks us to question what audiences often traditionally accept: the story’s patriarchal, even misogynist attitude to women; the racist othering of the creepy villain, Monostatos; and how Enlightenment reasoning can oppress us just as severely as the landed gentry once oppressed tenants.

Continues nightly from Tuesday, May 21st, until Saturday, May 25th (plus matinees on Thursday and Saturday), at the Gaiety Theatre, Dublin; . See irishnationalopera.ie has full details, including scheduled cast changes