‘Like two Abercrombie models at the Wesley disco’: The best and worst of Eurovision 2019

The bookie's favourite Duncan Laurence of The Netherlands has won the 2019 Eurovision Song Contest. Twenty-six countries participated in the grand final of the 2019 contest at the Expo Tel Aviv venue in Israel. Video: Reuters 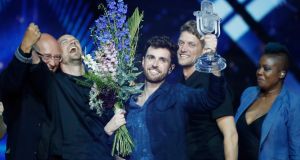 This is evidently what passes as The Bants in Israel; “Technically, this is our third date, and you know what happens on a third date…” Assi Azar says in his most wink-wink voice. (Dramatic pause) “We announce the winner!”

The moment is a perfect summation of the entire competition, all shiny teeth and bob-all irony.

I think I’ve figured out the chink in the modern-day Eurovision’s armour. God be with the days when Eurovision was an event worth staying up past bedtime for: a fizzy, exotic anthropological adventure where you could find out what constitutes a banger in Belgium, what French warbling sounded like, how brilliantly odd odd continental pop could be, and what someone from Yugoslavia looked like (first time for me seeing someone from Yugoslavia at any rate).

But now, the idiosyncrasy has been shaved right back; the cheesy, catchy and cheeky moments supplanted by earnest, unironic, and invariably talented singers who sound like every X Factor finalist ever. And herein lies the big conundrum; where years ago the Eurovision spectacle was a thing of wonderment, now we can get this type of showmanship on every episode of X Factor or similar, which has effectively been beamed into the house very Saturday night for the last two decades.

In any case, the Tel Aviv Expo’s crowd appear to have no qualms about being subjected to what is essentially the X Factor on protein powder. Still, this is a crowd that’s on Day 5 of the entire fandango, so if they’re not sufficiently socially lubricated by now, they never will be. The big question hanging in the air is likely, “when is Madonna on?” For me, it’s “when can I see the Icelandic entry on again?”

“I think the Australians might squeak it,” I tell my viewing companion, trying to sound like I know what I’m talking about. “It’s a banger,” I say decisively. I really do want the immovable Iceland to win, of course: their non-reaction would be a thing to behold.

The hot favourites to win tonight are Sweden’s John Lundvik (Too Late For Love), a song that wouldn’t sound out of place in Made In Chelsea, and the Dutch entry Duncan Laurence’s Arcade. The latter has been compared to Coldplay, and it certainly would be, if Chris Martin joined The Script during transfer season.

The Eurovision final is interesting for a couple of reasons. It’s the first time to hear the entries from the Big Five (Germany, France, Britain, Spain, Italy); so called because they have deep enough pockets to skip the semi-finals and plough straight through to the finals. Incidentally, the French entry, Bilal Hassani’s Roi,while no lungbuster, is the closest this night has to an orthodox Eurovision spectacle.

Airline baggage restrictions being what they are and all, most of tonight’s entrants are sticking with their original costumes (although Greece’s Katerine Duska appears to have added a giant Mooncup to her stage set-up and sure why not). It becomes clear that some entries are more ear-wormy than others: the Czech Republic’s Friend Of A Friend is starting to grow on me despite the bang of Love Island off it, as is the Cypriot entry (Tamta’s Replay). I also have something of a soft spot for Albania’s Jonida Maliqi.

Alas, some don’t stand up to repeated viewing. In fact, Slovenia’s Zala Kraji & Gasper Santi (“two Abercrombie & Fitch models having a slow set at the Wesley disco” under the Trades Descriptions Act) provide the perfect opportunity to pop off and stick on the kettle.

Madonna’s bants are nearly as good as that of the Israeli presenters. “I went from my hotel to rehearsal,” she deadpans. And a little later: “You’re all winners, no matter what happens.”

Yet before you can think ‘Jeez, dialling it in much?’ she delivers the best song in the world ever, Like A Prayer (off-key, but perhaps the overall theme of tonight is ‘things that were massive in the ‘80s but maybe not so much now’).

Anyway, what do I know: Despite a strong start, Australia fell a few furlongs in, and the jury votes resulted in a tight enough race between North Macedonia, Sweden, The Netherlands and Italy. Before the public vote, Sweden were in first place with 239 points. The final jury (hosts Israel) handed 12 points to the Netherlands, resulting in them ending in third place with 231 points and North Macedonia coming second with 237 points.

And in the end, Iceland’s Hatari managed the closest thing the night had to a political protest when they held aloft Palestinian banners without so much as flicking a heavily mascara’d eyelash.

Yet the public vote ostensibly changes everything on a dime (and to be fair, is a suitably suspenseful, gladiatorial finish). And in the end, the public vote snatched defeat from the jaws of North Macedonia and handed victory to the Netherlands’ ColdScript entry. See you in Amsterdam in 12 months’ time; just be sure to book that extra suitcase on Ryanair next year, folks.