From relentless merchandising to solo successes, their legacy can be in little doubt 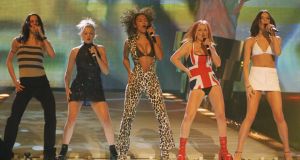 The Spice Girls have remained loved and discussed even in the 23rd year of their career. Photograph: Dave Benett/Getty Images

When the Spice Girls began their first world tour in Dublin’s The Point Depot on February 24th, 1998, tickets were priced at £22.50 but this tour ultimately cost them one Ginger Spice, who exited on May 31st.

One week shy of that devastating 21st anniversary, the Spice Girls are tempting fate by returning to Dublin to open their latest tour and play their second Irish show ever. This time, however, they’re up one Ginger but down a Posh.

Despite their comings and goings, the Spice Girls have an unwavering audience. From being the most successful girl group of all time and becoming one of the most merchandised music groups in history, they completely changed the formula of fame in the whirlwind of their first two years.

Between 1996 and 1998, they staunchly occupied the gossip pages and the charts, achieving what so many UK acts have failed to do; they broke America. With eight of their nine singles from that period hitting the number-one spot in the UK and all of them reaching the top 10 in Ireland and the top 20 in the US, Spice mania was a global phenomenon. Succeeding the sometimes too serious Britpop era, their arrival was like when the bold girls made the teachers laugh during class.

“Everybody was too cool for school,” says Alison Cresswell, a former assistant producer of BBC’s Saturday morning children’s show Live and Kicking, of the Britpop years. “And then the Spice Girls came along and they brought the fun back into pop again.”

Their attitude was borderline anarchic, their music was unapologetically camp but their message was always clear; girls rule. Spice, their debut 1996 album, had songs about their mums, safe sex and the importance of sisters before misters. Although they graced the covers of lad mags and were fancied across the globe – rapper Eminem tastefully wondered which member he would impregnate on 1999’s My Name Is . . . – they were a pop group for girls.

According to Cresswell, who booked one of their first TV gigs on CBBC’s Broom Cupboard, the usually dead studio café was suspiciously busy with staff and their children whenever the Spice Girls were guests. She muses on why their success was so immediate.

“I think if anybody knew that, then we’d all be making pop bands. I think it was a real situation of kismet, that it was right time, right girls, right situation, right management and right when the kids coming up wanted something a bit different,” she says. “It is that sort of golden ticket.”

Their nicknames, which were created by Peter Loraine, the editor of the now defunct Top of the Pops magazine, presented five identities that little girls, boys, teenagers, women and men could claim as their favourite. Girl bands before them – The Supremes, The Bangles, TLC – dressed to match, but the Spice Girls encouraged individuality and this was, ironically, uniformly replicated in playgrounds, teen discos and night clubs, through platformed runners, streaked hair, little black dresses, leopard-print tops and football jerseys.

“Going way, way back, you can look at The Bay City Rollers because suddenly everyone was wearing tartan and tartan was not necessarily something that anybody would wear, but with the Spice Girls, because it was at the beginning of marketing being used very cleverly to promote a band, they did again tap into something that people wanted,” says Cresswell.

“I remember going to the hairdresser and asking for streaks and coming out looking like Geri, which was very bizarre because they were on the show the following weekend and I’m like ‘Look! Look what you’ve done to me’.”

A new form of capitalist pop, their merchandise filled Argos catalogues and letters to Santa. In terms of sponsorship deals, brands and products, the girls raked in money from: Impulse body spray, Cadbury’s chocolate, Chupa Chups lollipops, the Polaroid SpiceCam (which now retails at €179.99), Walkers Crisps, Benetton, British Telecom phonecards, dolls made by Hasbro and their own Playstation game.

The Spice Girls – and, later, Brand Beckham – paved the way for the Kardashians and Premier League footballers who would cash in on their name first and figure out the product later.

Their biggest deal, though, was the multimillion collaboration on Pepsi’s Generation Next campaign, a slogan that made it into Move Over, an album track from 1997’s Spiceworld. Ray D’Arcy, who then presented The Den on RTÉ Two, was flown to London with Dustin the Turkey to interview them at the Pepsi press junket.

He recalls the highs – “It was a huge deal” – and the lows of stepping into their world. “We were the last ones in, and I think it could have been after 10 o’clock at night and they’d been there since lunchtime or something like that,” he says. “When we got to go, their management decided that they weren’t going to talk to Dustin. They didn’t talk to turkeys.”

“’Do they not know who he is?’ I said, trying to plea with their minders. You can imagine. They were a global brand that had just signed up to another bigger global brand, as in Pepsi, and there was this man with a Kildare accent trying to argue the point about a talking turkey. The craziness of it all.”

Still, everyone wanted to be in their gang. They had fans in Nelson Mandela, Princes William, Harry and Charles and almost every big name in music, comedy and film cameoed in their 1997 blockbuster Spice World. When novelist and feminist Kathy Acker interviewed them for Vogue, addressing race, sexism and politics, she surprised herself by saying: “I like these girls. I like being with them”.

However, their political comments have made some people question if Girl Power means power for some and not all girls, with Beckham telling historian Simon Sebag Montefiore that “the Euro-bureaucrats are destroying every bit of national identity” in 1996 and Halliwell famously claiming in 1997 that Margaret Thatcher was “the original Spice Girl”.

“I think it’s important not to look at 1990s Spice Girls Girl Power with too much of a 2019 lens,” says 2FM DJ and Spice Girls fan Louise McSharry. “They were young women with microphones constantly in front of their face and willing ears lending their opinions weight. The consequences of what they had to say were much less significant than they would be now, with Twitter pile-ons and cancel culture, so they could afford to spout off a bit.”

However, young girls finding value in the fact that they were girls will always overshadow that. “I think the overall message of girl power and friendship being the most important thing is what stuck with lots of women my age and younger,” says McSharry. “I mean, I’m not a feminist because of the Spice Girls, but being a fan of theirs definitely set me up to be open to feminist principles when I was presented with them.”

A golden time for children’s media, shows such as The Den, Live and Kicking, Top of the Pops and their affiliated magazines, lended the Girls our undivided attention but many doubted their staying power. Twenty-three years later, the Spice Girls continue to sell out stadiums and fill the gossip pages, while remaining a divisive milestone in modern feminism and the greatest girl band of all time.

Mel B
I Want You Back (featuring Missy Elliott)
Recorded while the band was still in action, this is a perfect slice of strung out R&B.

Mel C
Never Be the Same Again (featuring Lisa ‘Left Eye’ Lopes)
The most successful solo Spice, musically speaking, is Sporty. Her debut album Northern Star is loaded with versatile pop bangers and this was her first solo number one.

Geri
Look At Me
A darkly funny death to Ginger, based on this song alone, Geri should have had the biggest solo career and, Lord knows, she certainly tried.

Emma
What Took You So Long?
Earning her only number one with this cooing, country-pop song, Emma usually takes fancy to Dusty Springfield-styled pop but this still sounds great today.

Victoria
Let Your Head Go
So good it’s not even on Spotify. This dance-pop song is criminally underrated and its video is a masterpiece.