Luckily, we have Marty Whelan. Listening to him is like having a gentle nervous breakdown 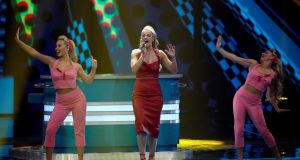 Ireland’s Sarah McTernan and her song 22 does not make it to the finals of this year’s Eurovision song contest. Ah well. I liked it.

It’s a stranger than usual Eurovision. The competition is always political – don’t let anyone tell you otherwise. Its fuzzy internationalism is built on the myth of cleanly defined nation states, so the happy utopianism regularly runs into hard political reality around the edges.

This year, in Tel Aviv, that political reality is the occupied territories and the appalling treatment of Palestinians who live there. Not everyone can just ignore it and many have chosen to boycott it this year.

And yet, the Eurovision is still, well, the Eurovision, and they do their best to keep reality out of their bubble with home-made signs, whimsy and fiery productions. It can be overwhelming.

The music is increasingly circling a strange new genre of a folk-infused Europop, untouched by R&B influences and marked by anguished wailing.

And then there are the strange foreign conceptions of fame to contend with. The four presenters are, quite frankly, no match for Twink, solicitor Gerald Kean, Judge from Wanderly Wagon, Vogue or any of our other celebs.

Luckily, we have Marty Whelan’s reassuring presence. Here are some things he says:

“Put that child down.”

“They’re having an auld dance.”

“Well that frock is ruined now.”

You don’t even need to know to what those words refer to enjoy them. He is the voice we hear in our heads. Hearing him is like having a gentle nervous breakdown.

The first act is Armenia. They are represented by a lady named Srbuk who expresses herself by pointing at us dramatically like a politician whose just been to the Communications Clinic. Then the stage appears to crack like an iPhone, goes on fire and she falls to her knees, presumably because she’s frightened.

Next is Ireland, which is, you might remember, where you live. Sarah McTiernan comes out to dance around a revolving bar against a pop art cartoon background. She sings a song called 22, all about the foundation of the Irish State.

She ends up lying on the revolving bar, just like de Valera. As soon as she takes to the stage I stand to my feet, put my hand on my heart and star bellowing Amhrán na bhFiann. That’s how patriotic I am.

Anna Odobescu from Moldova belts out a song called Stay. As she does so, another person does “art” on a table covered with white powder. Ha! I too remember the boom years.

Actually, this is a nifty trick, as an overhead camera films it and the images are then projected on a screen behind Anna.

Luca Hanni from Switzerland bounds out with some other excitable young people to tell us that “she got me dirty dancin’” to which I say, “Luca, take responsibility for your own dirty dancin’, man. And is that really an appropriate form of dancin’ for the workplace?”

A swaying woman from Latvia in a cowboy hat sings a nice folk song accompanied by guitar picking hippies. I quite like it but presume they’ve broken in here and will soon be escorted from the building. The cameraman circles them trying to figure out whether to lunge.

Romania’s Ester Peony sings accompanied by two hunky backing dancers in rags. This is a gift for those of us who’ve got a depression-era hobo fetish. They’re also wearing what look like neck braces, which means if this Eurovision thing doesn’t pan out they can submit a lucrative personal injury claim (and it might work too given that the stage keeps going on fire).

Leonora from Denmark sings her song Love is Forever, before ascending a huge chair on which she sits looking like a slightly dazed child as fluffy clouds float by in a blue sky. It’s possibly a comment on the infantilising properties of the Scandinavian welfare state. Despite this reactionary message, I like it.

John Lundvik from Sweden performs his Lionel Ritchie-like disco-tastic Too Late for Love, flanked by glittery soul singers. This is the best song and unlike everyone else tonight he looks like he breaks a sweat, as opposed to looking like someone built a dancebot in the sexlab.

Paenda is not, sadly, a panda. She is a blue haired Austrian human, and she sings a lovely song called Limits with the warbling high-pitched coo of someone trying to coax a dolphin out of a tree. “You shouldn’t be in a tree, little dolphin, you should be in the sea!” I imagine the coo means.

Roko from Croatia emotes in song while flanked by sexy winged angels. They are all oiled up, so this is for the people who have moved on from their hunky hobo fetish and now crave golden winged seraph love. Soon Roko has sprouted wings himself. “He could probably get home on his own steam with them,” says Marty, who is a national treasure.

Michela from Malta sings the boppy Chameleon against another conceptually confused set that turns from a house to the desert to a jungle while her backing dancers crawl and prance and mine about the stage. “Control your dancers, woman!” I cry.

“Come on let your feelings out, run wild, run with the lions,” Lithuania’s Jurij Verklenko cries during his song Run with the Lions.

This is, of course, terrible advice. Pop songs generally take an over idealised view on animals and their shite. If you really wish to “let your feelings out” I suggest you speak to a professional and not go cavorting with furry carnivores.

Sergey Lazarev is a Russian Eurovision veteran and tonight he appears accompanied by multiple versions of himself who are dealing with inclement weather conditions and enclosed in small cells. The song is called Scream. I’m a little worried about him.

Albania’s Jonida Maliqi sings from a sort of ring of fire/Eye of Sauron thing while dressed like a fancy lady from Game of Thrones. Then a trio of Norwegians wearing leather and buckles and amulets warble about a Spirit in the Sky, presumably Odin (The stage goes on fire again and nobody seems to care).

Duncan Laurence from the Netherlands sits tinkling at a piano and falsettoing a pleasant tune before an overcast sky. Then a lamp descends for some reason. We have an Ikea now, so I’m not as easily bought by nice homeware. But … it is … it is a nice lamp. Okay, 12 points.

Tamara Todevska from North Macedonia sings a song about empowerment and pride. And Chingiz from Azerbaijan croons from beneath a huge flaming heart, against a white inverted triangle, flanked by weird robots.

Then we wait for the votes to be counted. We watch a moving performance by Shalva, a band featuring young people with disabilities. Then a man performs a weird magic trick, there’s an avant-garde mash-up of Eurovision highlights over the decades, and we see some snippets of performances from the countries that go straight through to the final (the Eurovision has a sort of permanent security council that can skip the queue).

And then there’s a tense reveal of the finalists, and we find Ireland doesn’t get through.

It’s been a bad few decades for Irish acts in Eurovision. But if you recall the elephant in the room, you’ll know there are much worse things.

The James Bulger film: ‘It challenges my own opinion. So you know it’s the truth’