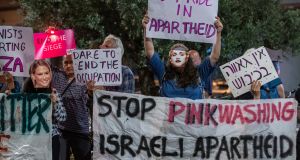 Israel had tried desperately to keep politics out of Eurovision but Palestinian flags were shown on two separate occasions during Saturday night’s final.

The first came during a performance by Madonna and guest star Quavo of her latest single, Future. As the pop superstar sang, two dancers on stage at the Expo Tel Aviv walked up the stairs hand in hand – the man had an Israeli flag emblazoned on his back, and the woman a Palestinian flag.

Later, when the votes were declared, members of the Icelandic act, Hartari, held up Palestinian scarves, prompting booing from the audience.

The European Broadcasting Union has condemned both gestures, insisting that the song contest is a non-political event.

Madonna responded by saying that “a message of peace is not political”.

Israeli culture minister Miri Regev described the pro-Palestinian gestures as “a mistake and inappropriate”. She also criticised the video clips screened during Eurovision showing off Israeli landscapes, because they failed to include any footage from the West Bank.

Aside from these controversies, the Israeli organisers were relieved that the week passed off without much political protest. A few pro-Palestinian demonstrations were held but no artists decided to stay away on political grounds and the feeling among the delegations and fans in Tel Aviv was very much one of keeping music and politics separate.

Overall, Eurovision 2019, won by Duncan Laurence of the Netherlands, was considered a great success in Israel. There was particular praise for the precise production and special effects, even though many of the songs failed to excite.

One of the key factors ensuring the success of the contest was moving the venue from Jerusalem to the largely secular, gay-friendly city of Tel Aviv, considered Israel’s party capital.

Immediately after her victory at last year’s final in Lisbon, Israel’s contestant Netta Barzilai, declared from the stage that Jerusalem, a sacred city to the three main monotheistic religions, would be the next venue. This was initially endorsed by prime minister Binyamin Netanyahu. However, it soon became apparent that holding the event in Jerusalem would be akin walking into a lion’s den.

The ultra-Orthodox made it clear that they would not tolerate desecration of the Jewish Sabbath to facilitate the holding of the prestigious event. Palestinians also objected to the Eurovision taking place in the city they see as their future capital and whose status remains a diplomatic hot potato.

Tel Aviv was the perfect, hassle-free, fallback option.However, the estimates of up to 20,000 Eurovision guests failed to materialise. According to the Tel Aviv municipality, 10,000 tourists came for the event, but regular holidaymakers avoided the city during Eurovision week, put off by the price increases, forcing hotels to push their prices back down to normal levels.

Tel Aviv municipality pulled out the stops to create a positive image.

“They’re seeing us in a new light,” said Iris Mazel, the vice-president of marketing at Expo Tel Aviv. “Not just the tourists and the bloggers, but also the delegations ... I think the Eurovision was a big step for us for tourism and for our image.”

It cost Kan, Israel’s public broadcaster, €35 million to stage the event. The government refused to contribute, forcing Kan to take out a huge bank loan, repayable over 10 years. The public broadcaster has already announced there will be significant cuts in the coming years in order to repay the Eurovision loan.