Sinéad O’Connor: ‘I have been a Muslim all my life and I didn’t realise it’

The singer has described her experience of ‘reverting’ to Islam 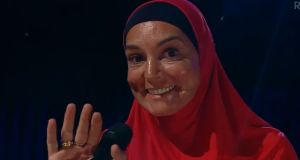 Sinead O’Connor smiles and waves at camera after performance of Nothing Compares 2 U on RTÉ’s The Late Late Show. Photograph: RTÉ Player

Sinéad O’Connor has described how she felt “at home” after reading the Koran and subsequently embracing the Muslim religion.

The singer, who has returned following a five-year hiatus from touring, announced her decision to “revert” to Islam almost a year ago and says she often wears the hijab as a means of signalling her new-found beliefs.

“The word ‘revert’ refers to the idea that if you were to study the Koran you would realise that you were a Muslim all your life and you didn’t realise it. That’s what happened to me,” she said on Friday night’s Late Late Show.

“I am 52. I grew up in a very different Ireland to the one that exists now and it was a very oppressed country religiously speaking. And everybody was miserable; nobody was getting any joy in God.”

The singer, who has long captivated audiences with her views on Irish life, spoke about reading the scriptures as a child and later exploring other religious texts “trying to find the truth about God”. She left Islam until last because she held her own prejudices about the religion, she said.

A great performance of ‘Nothing Compares 2 U’ from Sinéad O’Connor on Ireland’s #Latelate. https://t.co/qffIEEOhlc

“I [then] realised oh my God I am home, I have been a Muslim all my life and I didn’t even realise it.”

Ms O’Connor wore a hijab during her appearance on the show and gave performances of Shane McGowan’s A Rainy Night in Soho and Nothing Compares 2U, the latter song written by the late Prince to whom she said she was dedicating the performance.

Late Late Show host Ryan Tubridy asked the Bray singer if she was enjoying being 52 and if she was happy in life, to which she said she now felt like a 17-year-old.

“My experience of ageing is that as my body is getting older, I am getting younger,” she said.

As regards the notion of a “comeback”, Ms O’Connor said she was unsure if she still had an audience.

“I was really working so hard for years, I was burnt out. So it is a bit of a, I suppose a comeback,” she said.

Although achieving global fame in 1990 with her recording of Nothing Compares 2U, Ms O’Connor has released numerous albums and remains one of Ireland’s highest-profile artists. She is due to perform at Féile ’19 in Co Tipperary later this month.