Review: The show doesn’t segue but jackknifes from one thing to another 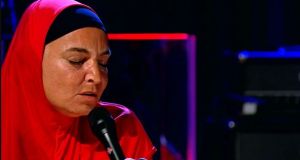 Sinéad O’Connor performing Nothing Compares 2 U on The Late Late Show on Friday. Photograph: RTÉ

To initiate its 58th series, the Late Late Show began not with that familiar drum roll but a wailing siren.

When it did strike up, the theme tune had a new sense of urgency as we watched countless emergency teams spring into action and sweep en masse through the RTÉ campus and into the studio. The fire brigade, St John’s Ambulance, Mountain Rescue, An Garda Síochána, the Order of Malta, the Irish Coast Guard, the Air Corps, Naval Service and Army . . .

Either this was to celebrate the nation’s emergency responders, or the Late Late Show was displaying a abundance of caution. The news that two of tonight’s guests – the triumphant Love Island couple, presumed eternal – had split-up (by text, went some reports) had only landed. Who knew what the fall out might be?

The fact that it was briefly possible to entertain those two options says a lot about the show, which doesn’t so much segue from one thing to another as jackknife, careen and keep rolling. In the opening minutes, Ryan Tubridy – host of the show for 10 years, and making no big deal about it – slalomed between a happy celebration of the marching bands and volunteer spirit (“A good news story”) then hushed respect for the families of those lost in in the Blacksod tragedy of 2017, bestowing medals as “a token of national gratitude”.

To get from there to an interview with Maura Higgins, the Longford Love Island contestant whose fierce displays and contributions to the broader lexicon almost amounted to a national emergency themselves, required contortions no other show would dare attempt.

Tubridy suggested a continuum of Irish achievement during the summer, from Eoin Morgan captaining the victorious English cricket team and Shane Lowry winning the British Open to Higgins, who schooled the world in the “fanny flutters” of female desire, and whose sharp tongue left undeserving male contestants in funny flitters.

As a radio broadcaster, Tubridy can seem personally affronted by the zeitgeist on a daily basis. But joined by Love Island co-winner Greg O’Shea (now sadly single as he and Amber Gill agree to see other branding opportunities) and Higginss’ onscreen squeeze Curtis Pritchard, Tubridy gives the appearance of someone fully clued in. “Everyone asks me this question,” Higgins demurs when the subject of her relationship status comes up. “Because it’s called Love Island,” says Tubridy, flaunting his research.

Maybe he’s learned to loosen up. Early last year the Late Late Show took a bold step forward and got rid of Ryan’s desk. It’s hard to overstate how significant an improvement it has made. Tonight, on more attractive furniture, Ryan is more daring still and has gotten rid of his tie, a move so wildly out of character you half expect the coast guard to intervene.

But just look at him hanging out with Lewis Capaldi, barely batting an eye when the Glaswegian singer and universal scamp talks about getting “pished” in Coppers, or happily compares his chin to a “bawbag”. Watch him keep pace with the dazzlingly quick-witted Aisling Bea, who is as heavy into Instagram culture as the Late Late’s researchers seems to be, but also a persuasive critic of it: “You don’t see all the failure,” she says, now at the top of her game, behind the scrolling illusion of success.

Like Higgins, Bea addresses her mother in the audience, a gesture that reminds you what a uniquely intimate encounter the Late Late represents. When musical guest Sinéad O’Connor arrives to perform Rainy Day in Soho, resplendent in a scarlet hijab (she converted to Islam last year), her appearance seems like another occasion for national gratitude.

The hijab, she explains in interview, is not essential, but it is a gesture to fellow adherents as salutary as waving hello. As supportive as the interview is, it’s nonetheless remarkable to hear O’Connor return to Nothing Compares 2 U, in honour of Prince, in a jaw-dropping performance which she concludes with a touching, inclusive little wave to the camera; one for everyone in the audience.

Nothing compares to the Late Late Show either, now 57 series into a programme designed to be bit of everything. Like magician Keith Barry’s unflappable efforts to keep Higgins, Prithcard and Bea focussed for a final spot of mind reading (“You really don’t want to see what’s inside my head,” Bea cautioned. “Oh, hack mine!” urged Higgins, with fewer concerns), the show is an anomaly for how many weirdly disparate things it can accommodate. The aunties and mothers. The heavily touted competitions and giveaways. The supremely weird lurches in tone. The show, in other words, is a national panic. But somehow it doesn’t need rescuing.