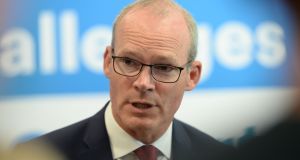 Tánaiste and Minister for Foreign Affairs Simon Coveney has rejected Boris Johnson’s claim that the Northern Irish backstop undermines the Belfast Agreement. Speaking at the British-Irish Association in Cambridge, Mr Coveney said it was the UK’s decision to leave the European Union that had upset the balance of the agreement.

“The European Union, like it or dislike it, set stable, predictable foundations for trading goods and services, for freedom of movement, for questions of equality and rights, citizenship and identity, for culture and educational exchanges, for cross-Border co-operation,” he said.

Mr Coveney said the agreement was conceived and built on those foundations and delicately balanced on the foundations provided by shared EU membership.

“Take that away through Brexit and that delicate balance is shaken, whether we like to admit it or not. A no-deal Brexit rocks those foundations, potentially overnight. I therefore respectfully but passionately disagree with prime minister Johnson in his contention that amid the geopolitical earthquake of Brexit itself, it is the backstop that threatens the delicate balance of the Good Friday Agreement. In truth, the backstop is a compromise, even though I know the very word ‘backstop’ is a dirty word for some,” he said.

Mr Johnson has called for the backstop to be removed from the withdrawal agreement, arguing that it is inconsistent with the Belfast Agreement because it does not enjoy the support of a majority of unionists. He has also described it as anti-democratic on the grounds that citizens in Northern Ireland would be subject to rules made in the EU, where they would have no voice after Brexit.

Mr Coveney said Mr Johnson had suggested no viable alternative to the backstop and that none was likely to be found before the UK is due to leave on October 31st.

Mr Coveney said the Government rejected any attempt to link Brexit to a Border poll or to the issue of Northern Ireland’s constitutional future. But he acknowledged that Dublin should be more conscious of unionist sensitivities in discussing issues surrounding Brexit.

“In our approach to Brexit we have sought overwhelmingly to find a solution that sees the least change in people’s lives. Brexit is what is causing the challenge here. It is the disrupter, not the backstop. It is the decision to leave the European Union and the complexity that creates for politicians to solve that we are trying to respond to,” he said.

“Have we done everything perfectly? Certainly not. We may on occasion have said things that reasonable people heard in a different way from what they were intended to. But I think it would be fair to say that people on all sides have done the same.”