DUP leader Arlene Foster was among thousands of people who took part in a silent protest outside the North’s Parliament Buildings at Stormont to show their opposition to the planned legalisation of abortion in Northern Ireland. 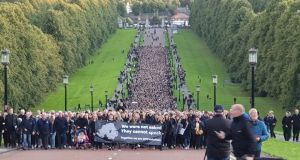 Thousands of people stage a silent demonstration at Stormont over the planned liberalisation of abortion laws in Northern Ireland on Friday: Photograph: Rebecca Black/PA Wire

DUP leader Arlene Foster was among thousands of people who took part in a silent protest outside the North’s Parliament Buildings at Stormont to show their opposition to the planned legalisation of abortion in Northern Ireland.

The North’s former first minister said she was “joining thousands of people from across all backgrounds tonight, to stand together and defend the rights of the unborn child. Both lives matter”.

The protest was organised by NI Voiceless, an anti-abortion group which was set up to oppose legislation passed by the UK parliament which will permit abortion in Northern Ireland.

The group said the people of Northern Ireland were not consulted about the change in the law, and they claimed there was no support for the planned liberalisation of the abortion laws.

Abortion is currently illegal in Northern Ireland in most cases, including in cases of fatal foetal abnormality, incest or rape.

The Northern Ireland (Executive Formation) Act, which was passed by MPs in July, requires the British government to regulate to provide access to abortion in Northern Ireland if the North’s devolved government at Stormont is not restored by October 21st.

It would bring the law in Northern Ireland into line with the rest of the UK.

There has been no Assembly at Stormont since January 2017, when the North’s power-sharing government collapsed amid a row over a botched renewable heating scheme.

More than 1,000 women from Northern Ireland travelled to England and Wales for an abortion in 2018, according to NI department of health figures.

According to an October 2018 opinion poll on behalf of Amnesty International - which campaigned for the change in the law - 65 per cent of people in Northern Ireland believed having an abortion should not be a crime, and 80 per cent thought that a woman should have the choice of abortion if her health was at risk, or in cases of rape or incest.

A ComRes poll of 1,013 Northern Ireland adults published in October 2018 found that 64 per cent of people agreed that changing the law on abortion should be a matter for Northern politicians, not Westminster.

Protestors of all ages - including some who had travelled from the Republic of Ireland - took part at the protest at Stormont on Friday evening.

Dressed in dark clothing, each held up a light before a banner bearing an image of Northern Ireland and the words “We were not asked, they cannot speak. Together we are @NIVoiceless.”

The organiser, Sarah Crutchley, said it was a “pressing time in Northern Ireland.

“Concerned citizens like myself, of all ages, religions and political persuasions, can come together and express our deep concern and dissatisfaction with the decisions made in Westminster to impose extreme abortion laws in our country.

“Our silence will speak volumes. We were not asked, and the unborn children have no voice.”

1 Eating out in Dublin – the homeless way
2 Irish Times poll: Large majority want change of government
3 Which jobs do teenage girls and boys aspire to have by age 30?
4 Miriam Lord: Greens take to the beach as signs emerge of a rising tide
5 Maria Bailey announces she will not stand for re-election
Real news has value SUBSCRIBE