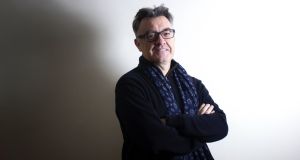 Eamonn Quinn, co-founder and artistic director of the Louth Contemporary Music Society and winner of the prestigious Belmont Prize.

The list of winners of the €20,000 Forberg-Schneider-Stiftung’s Belmont Prize for contemporary music is an interesting one. It begins in 1999 with the Irish Chamber Orchestra’s multi-talented German conductor Jörg Widmann (who is also a composer and clarinettist), continues with French pianist Florent Boffard, German violinist Carolin Widmann (sister of Jörg and due to play Korngold with the RTÉ NSO in Galway and Dublin next month), the French string quartet Quatuor Ebène, French composer Bruno Mantovani, Italian pianist Marino Formenti, American critic and writer Alex Ross, German stage director Sabrina Hölzer, and Serbian composer Milica Djordjevic.

The 2018 winner is Irish – Eamonn Quinn, founder of the Louth Contemporary Music Society (LCMS). He is, as the Forberg-Schneider Foundation’s press release puts it, “the first backstage laureate”. He has not been singled out as a performer or a creator of music, but as a programmer, “a sophisticated explorer and communicator with a burning passion for contemporary music”.

The bottom line for me: is the music any good?

The foundation’s words explain him well. “He listens to as much as he possibly can, studies mountains of scores, scours the web, searches on his own and discovers, with unfailing instinct and visionary imagination, all that is good, new and dramaturgically relevant. He pays no heed to such labels as mainstream, zeitgeist or commercial potential, not even as things to be avoided: ‘The bottom line for me: is the music any good?’”

In essence, he has nothing in the way of what you might call a new music agenda, just an enquiring mind and an always curious ear. His open-mindedness and his lack of preconceptions are high among the qualities that help endear him to composers.

He doesn’t just programme their work or invite them to come to Dundalk, where he lives, or Drogheda, where he also puts on concerts. He tries to get inside their heads and then he throws ideas at them. He managed to commission a work from Arvo Pärt by suggesting Irish connections that Pärt might be interested in, and one of them stuck.

So when Pärt came to Ireland for the 2008 RTÉ Living Music Festival, the only new work by him to be heard in Ireland that year was performed before the festival started, and in Drogheda, not Dublin. Quinn put on a concert that included Pärt’s The Deer’s Cry – the text, which is attributed to St Patrick, was the suggestion that fired the composer’s imagination.

Pärt is quoted on the LCMS website. “Exceptional things only happen when the passion of individuals nourish an idea. When Eamonn approached me in 2006 and asked for a new work, I felt this passion. It, and the story of Ireland, inspired me to create The Deer’s Cry, which ever since has been very close to my heart. I gratefully remember my collaboration with him and his society. The music world needs such committed fighters as Eamonn Quinn.”

A year earlier, Terry Riley had delivered Loops for Ancient-Giant-Nude-Hairy-Warriors Racing Down the Slopes of Battle – Riley told him that he had “waited 72 years to be asked to perform in Ireland” – and the following year’s commission went to John Tavener.

Quinn’s musical passions are also documented on nine CDs, some of which are graced with the work of Iranian designer Reza Abedini. Back in 2011 I asked Quinn how he had chosen Abedini to design a poster for him. “I recognised that the music I was getting interested in had moved to the east,” he explained, “and the visual language of the posters and CD covers hadn’t.

“So I researched, and came across this exceptional designer in Tehran, and discovered he works part of the time in Holland. I rang his office there, they tried to fob me off with a Dutch designer, but I insisted, and they put me through to Reza’s closest colleague, who turned out to be from Dundalk. And it moved on from there.

“He said he wouldn’t just do a poster for us, that he wanted to design everything going forward, because the visual language wasn’t on a par with the musical language.”

Quinn’s programming is like a diary of his enthusiasm and explorations. Preoccupations come and go, some of them appear only fleetingly, some linger on.   His next concert, as part of Drogheda Arts Festival on Saturday, May 5th, is of John Luther Adams’s Beatles-inspired Four Thousand Holes for piano and percussion (Taka Kigawa and Russell Greenberg) with electronics.

Pesson, Tanaka and Pisaro will be making their first visits to Ireland for the occasion, and the repertoire will also include Pärt’s Stabat Mater, Gavin Bryars’s Jesus’ Blood Never Failed Me Yet, and pieces by Hildegard von Bingen.

Appropriately enough, the festival (in which the daytime events are free) kicks off with the formal presentation of the Belmont Prize. Given how slender resources usually are in the world of new music, you can be pretty sure the money has all been spent already.  mdervan@irishtimes.com