Kind of Blue: A glory of 20th century music, reorchestrated in Ireland 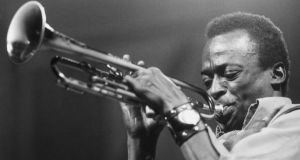 “I don’t remember hearing it for the first time,” says Guy Barker. “It’s almost like it was always there.”

The London trumpeter, who has played his horn for everyone from Frank Sinatra to Sting to Kajagoogoo, is talking about Kind of Blue. Recorded 60 years ago by Miles Davis, one of the greats of Barker’s instrument, Kind of Blue is an album that has become so ubiquitous that anyone who has ever been in a restaurant in the western world has probably heard its soft tones and experienced that Kind of Blue moment of transfixion.

“I would never have it as background music,” says Barker, who will take the podium at the National Concert Hall in Dublin later this month to conduct the RTÉ Concert Orchestra in his own arrangements of those iconic tunes, “but there are a lot of people who do, and for them it’s like a soundtrack – it creates an atmosphere.”

It’s true. The sound of Kind of Blue – that refined, languorous atmosphere, with the laid-back grooves, the ambiguous harmonies and the refined intensity of the playing – may be one of the glories of 20th-century music, revered and imitated by jazz musicians ever since, but in the wider consciousness the bestselling jazz album of all time has come to represent a certain kind of sophistication that people seem to aspire to, particularly when they’re eating.

So when Barker was approached a few years ago with the idea of arranging that music for the BBC Philharmonic Orchestra, his first reaction was to wonder what he could possibly add to music that was already so perfect and so well known.

Gil Evans just told us to choose whatever notes we wanted to play, and when we played it, it sounded quite noble and orchestral

“The problem is that Miles is such an iconic figure in music,” he says. “If a musician comes along like Louis Armstrong or Charlie Parker or Mozart, these geniuses of music, and they managed to change the way we conceived music, they changed it once in their life – you’ve got to be a genius to do that. But Miles did it fives times. He was there at the beginning of the bebop era, he was there with the Birth of the Cool, he did Kind of Blue, then the fabulous 1960s quintet with Wayne Shorter, and then the jazz-rock thing with Bitches Brew.”

Barker is also quick to point out that Miles can be taken as a collective noun for the groups of hugely talented musicians who gathered around the trumpeter over his career. “The thing is, if you listen to all those albums, the majority of the music is made up of the improvisations of the musicians in the band”.

It was arguably Birth of the Cool, recorded 10 years before Kind of Blue, that first introduced the world to Milesian cool. In the late 1940s the young Davis was part of a coterie of forward-looking musicians who congregated in the Canadian arranger Gil Evans’s tiny basement apartment on 55th Street in New York, and the ideas that came out of those late-night sessions would crystallise in a series of recordings that came to be known as the Birth of the Cool.

In particular, the bond between Davis and Evans was to be deep and lasting, and they would go on to produce a series of classic orchestral jazz records in the late 1950s, including Miles Ahead and Sketches of Spain, where Davis’s lonesome trumpet sound found perfect resonance in the glowing harmonic caverns hewn by Evans.

“He was a wonderful guy,” says Barker, who toured and recorded with the Gil Evans orchestra during the 1980s. “When I was in my 20s, Gil even came over to my flat in Covent Garden and we watched Louis Armstrong videos and talked about music.”

“Obviously as far as orchestrated Miles Davis is concerned, you’re not going to beat what Gil Evans did, so you can’t touch that music,” says Barker of those great Miles Davis orchestral albums. “But then I remembered that when I worked with Gil, one night the audience wanted an encore, and Gil said to us, ‘Let’s play So What – we’ll just busk it’.”

Kind of Blue’s iconic opening track, with its plangent chords from pianist Bill Evans, and the call and response motif between double bass and horns, is one of the most covered tunes in jazz.

“Gil went off stage and came back with a plastic bag, and he handed out these pieces of manuscript paper, and it was the introduction that Bill Evans plays on the piano at the top of that whole album. Now I always thought Bill Evans was improvising that, but he wasn’t. Gil actually wrote out that intro for Bill to play.”

It was the memory of that night that changed Barker’s mind and convinced him that orchestrating Kind of Blue might work. “Gil just told us to choose whatever notes we wanted to play, and when we played it, it sounded quite noble and orchestral,” he remembers. “So I thought, Okay, let’s see what I can do with that opening with a full orchestra.”

Barker traces a direct line from Gil Evans’s basement to the sound of Kind of Blue, but there is another Davis recording that he sees as crucial to the development of that sound.

“I think its precursor was actually the soundtrack for A Lift to the Scaffold, which was a year earlier,” says Barker. “Louis Malle asked Miles to come over to Paris and look at his film, and Miles improvised a soundtrack to it. And what he was doing was creating an atmosphere, and I think part of that went into Kind of Blue. I think that’s why it does what it does.”

Barker’s experience as a first call trumpeter on the London scene during the 1980s and 1990s has stood him in good stead as an arranger and he clearly relishes the challenge of writing for a full orchestra. But he concedes that projects like Kind of Blue leave little room for keeping his trumpet chops in shape.

Kind of Blue was one of the most important albums because of how well it communicates, how well it’s message comes across – it can have a huge effect on people

“I will always be a trumpet player,” he says firmly, “and my instruments are sitting there on the table. Sometimes they winkle at me like a dog wanting to go for a walk.” But for now Barker is happy to devote himself to writing, and he says that delving so deeply into Kind of Blue has given him new respect for the original recording, which he says he never tires of hearing.

“Because of writing this, and looking in real depth inside the solos, you discover more stuff, there’s more to hear”, he says. “I think Kind of Blue was one of the most important albums for so many reasons, but I think one of the main reasons is how well it communicates, how well it’s message comes across – it can have a huge effect on people.”

Guy Barker conducts Kind of Blue – Orchestrated with the RTÉ Concert Orchestra at the National Concert Hall in Dublin on Thursday, May 30th