Review: The music’s a little lacklustre, but the audience sing along to their hearts’ content 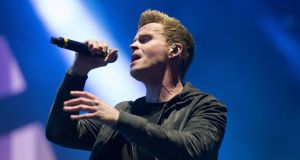 Electric Picnic 2019: Kodaline sure know how to get a festival job done. Photograph: Dave Meehan

Main stage
★★★☆☆
Clever Kodaline. Not for them a slow build-up from lesser-known songs to a climactic finish of favourites. They start their main-stage show with a handful of their chart-friendly songs that instantly have the early-evening audience on their side.

Some people regard the north Co Dublin band with a degree of scepticism, given that an early (and differently named) incarnation happened to take part in a television talent show. No matter: some years have passed, and they have morphed into one of Ireland’s most popular groups.

Several albums in, however, and it seems that broadening their music beyond melodic but lacklustre anthems is not on the immediate horizon. To these ears, the songs’ main flaw is a serious lack of roughage – which is, curiously, ably provided tonight via Kodaline’s rugged cover of The Cranberries’ Zombie.

So it’s a real surprise how easily, and skilfully, they conquer the crowd. The big mix of ages crammed into the main arena sing along to their hearts’ content, drunk on the music (at least) and the final evening’s sense of occasion.

Kodaline sure know how to get a festival job done. Fair enough.