Musician vows to ‘just keep going... we all have our ailments at this stage of life’ 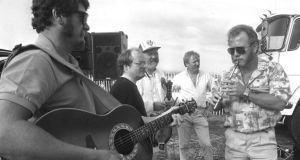 Brian Warfield, fourth from left in a photgraph from Early in the Wolfe Tones’ career, said he will continue to play and tour.

Wolfe Tones frontman Brian Warfield has said he has been diagnosed with Parkinson’s disease.

The 73-year-old musician has vowed to “just keep going” despite being no longer able to play the harp as a result of the condition.

“If I sit down and think about this, it’s going to get worse,” he told the Irish Sun.

“So instead I’ve decided to get up every morning and keep doing what I’m doing. Playing music and entertaining people.”

Parkinson’s disease is a long-term neurological condition that affects the way the brain co-ordinates body movements, including walking, talking and writing.

Around 12,000 people in Ireland have the condition.

Father-of-four Mr Warfield said he had recently told his fellow band members Tommy Byrne and Noel Nagle, both 75, about his diagnosis after telling his wife and family.

“The lads had the same attitude I have, which is what the hell, let’s just keep going,” he said.

“We all have ailments at this stage in life.”

Warfield said the muscle pain he was suffering as a result of the condition was “aggravating” but added: “you just get on with it.”

The singer said he first went to a doctor after noticing a tremor in his right hand.

After follow-up appointments with three separate neurologists, he was told he had the “beginnings of Parkinson’s disease”.

“The doctors have told me my Parkinson’s is slow, that I could get a few more years (touring),” he said.

“Maybe they might even find a cure in the years I have left. I have to be optimistic. I want to keep writing and recording and performing.”

The Art of Political Storytelling: Unravelling the spin that put Trump and Johnson in power
6