It’s Sunday. Opt for an early feed of chips, or get in touch with body and soul? 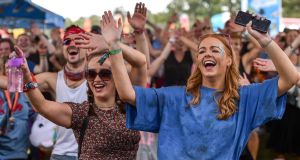 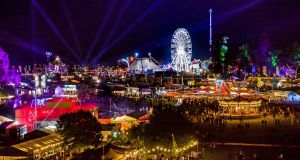 24-hour party people: ‘The vibe out there is better than I’ve ever known it,’ Melvin Benn, the festival organiser, said about Electric Picnic. Photograph: Aerial.ie

On Sunday morning at Electric Picnic, The Academic were doing a soundcheck in the Today FM SoundGarden when a group of curious passersby gathered to watch, lured by the sound of their hit single Why Can’t We Be Friends?

As the band stopped and started, their lead singer, Craig Fitzgerald, apologised. “I basically sang the whole Strokes gig last night, and I’m a little worse for wear,” he said. He could take solace in the fact that he was far from the only one feeling the after-effects of the night before.

All around the site, weary revellers wandered around in search of anything remotely resembling a cure. Some opted for a pre-noon feed of chips. Others went for a restorative soak in a hot tub.

At the Body & Soul Sanctuary stage Karla Kelly taught a movement class named Breathe the Beat, in which people synced their breath to Seven Nation Army and Can You Feel It.

At one point she instructed her students to touch different parts of their bodies and tell them they loved them. “I love you, legs,” she said. “I love you, knees.”

Rumour has it that many similar sentiments were expressed the night before, albeit with the aid of different substances.

At Mindfield’s Leviathan stage, Miriam O’Callaghan attempted to set the world to rights with a lively discussion featuring Eamonn McCann, Jason Byrne, Dearbhail McDonald, Fiona Hyde and Donie O’Sullivan. The main topic was – what else? – Brexit.

“I don’t think there will be one,” Byrne predicted.

McDonald wasn’t so optimistic. “I think we’re in a very dark and scary place,” she said.

After listening to McDonald and McCann spar on Brexit, the Belfast Agreement and the prospect of a united Ireland, Byrne intervened. “Jesus, the nordies can talk!” he joked.

Later, when he mocked Northern Ireland accents, McCann retorted, “I’ll have you know that we’re not okay with Free Staters slagging us off!”

At the main arena, Razorlight took the crowd back to the mid-2000s with a throwback set. Their frontman, Johnny Borrell, dedicated the song America to Donald Trump and Rupert Murdoch before directing a message at his own prime minister. “I can’t resist saying a quick f*** you to Boris Johnson today,” he said, to applause. It doesn’t pack the same punch as when Stormzy does it, but hey ho.

Soon people turned their attention to the All-Ireland football final. In Mindfield, a large group gathered around a single mobile phone to watch the closing minutes of the closely fought match. A young man in a Kerry jersey was a picture of agony; he couldn’t bear to look as Dean Rock prepared to shoot his final free.

When Rock struck it wide, and the referee blew the final whistle, the Kerryman roared, “Come on, ye f***ing pricks!” He shook hands with a Dublin fan and went on his way, his dream of Sam Maguire still very much alive.

This year’s Electric Picnic can surely be viewed as a success. Rumours of a wet weekend turned out to be largely unfounded; the sun even showed its face a few times. The festival’s headline acts all delivered, the likes of Billie Eilish and Gerry Cinnamon drawing near-record crowds. Some might grumble that the crowd has got younger, but perhaps it’s they who have got older.

Melvin Benn, the head of Festival Republic, which puts Electric Picnic together, was full of praise. “We’ve got 60,000 people here having the time of their lives,” he said. “The vibe out there is better than I’ve ever known it.”

This year’s festival was the biggest yet, and there are plans to increase capacity again, according to Benn. “I am certainly going to try to accommodate more people who are desperate to go to the Picnic,” he said.

Back at the main arena, Jess Glynne was performing Clean Bandit’s Rather Be. As she sang, youngsters climbed on each other’s shoulders and roared the song’s chorus: “No place I’d rather be!”

Sure, where else would you be? Let the battle for tickets to next year’s festival commence.