Now in it's 15th year Electric Picnic has always classed itself as a family festival, but do parents with children actually enjoy it? 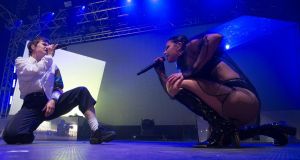 Electric Picnic 2019: neither Christine and the Queens (left) nor Charli XCX seemed to know where they were. Photograph: Dave Meehan

Charli XCX delivered a show packed with hits and sass at the Electric Arena on Saturday. From a Christine and the Queens duet to a defiant performance of I Love It, it was everything you could want from a pop star’s festival set. Punters left amped, hyped and ready for divilment. Stick her on the main stage next time, right?

For Billie Eilish, on the main stage on Friday. Not even elbow room was left for the Irish-American pop star’s Irish debut.

Celebrity sighting of the weekend

Greg O’Shea, the Love Island winner, at a five-course banquet courtesy of Tesco Ireland. ’Tis a long way from scrambled eggs in the villa.

A young woman’s embarrassing encounter with Harry Styles at the Jerry Fish Electric Sideshow on Saturday afternoon. Reader, he wasn’t who he said he was.

Ali Hewson, mother of lead singer Eli, walking through the crowd at the Rankin’s Wood stage during Inhaler’s show on Saturday. We can guess what she might have been thinking: Do I have to go through this again?

Wild Youth proved themselves more than worthy of their slot on Saturday afternoon. It was the Dublin band’s first time performing on the main stage, but they were far from daunted – and their radio-friendly bops were the perfect accompaniment to a sunny day.

The Ah, Hear! podcast stage, at Mindfield, was arguably the breakout star of the festival. Curated by Dylan Haskins, the line-up featured podcasting heavyweights like Blindboy Boatclub, Second Captains, Doireann Garrihy and the creators of the West Cork series. The packed tent was so popular that some people who couldn’t get in pressed their ears against the canvas to hear what was being said inside. A bigger venue next year?

The young woman who carried her boyfriend on her shoulders so he could see Charli XCX properly.

The Lives of Others: How and Why Populists Exploit the Fear of “Others” – hot topics intelligently sifted through, hosted by Jennifer O’Connell on Saturday, at Mindfield: Leviathan.

Sinéad Gleeson and Emilie Pine at Our Fragile Selves, talking about the fragility of living, and writing about it, in their books Constellations and Notes to Self. Chaired by Tara Flynn on Sunday, at Mindfield: Manifesto.

And kudos to the witty and well-researched podcast United Ireland, presented with smarts and quips by Una Mullally and Andrea Horan.

The World’s Worst Book Launch, in which Dr Günther Grun of the Bundesbank discussed Chicago Blues, the new book (written in three hours) by the thriller writer Saul Tillock (aka Paul Tylak). As translated by Barry Murphy, at Mindfield: Manifesto on Sunday, Dr Grun’s best jokes included “Any English in the tent? The exits are here, here and here...” and “You’re jealous of the Germans because we have our own type of measles.”

The Flying Machine, beside Body & Soul. Great organic food, with live (and quiet) music in the background. A coffee, a slice of lemon drizzle cake and a choir on a Sunday afternoon did the trick.

Julian Casablancas’s rant about the crowd’s chant of “Olé, olé, olé” (and his distraction by the huge TV screens on either side of the main stage) during The Strokes’ headline performance on Saturday. “Olé, olé, olé… What does that even mean?” the frontman asked. “It means ‘f*** yeah’,” responded a bandmate. Casablancas seemed unimpressed.

Most disappointing crowd for a main-stage act

Class they may be, but for some reason Christine and the Queens just didn’t pull the crowds. You could have herded cattle through the gaps.

Best reason not to flash the cash

We’ll pass on paying €35 for a Billie Eilish T-shirt, thanks.

Artists saying “Hello, Dublin!” in a field in the middle of Co Laois. We’re looking at you, The Strokes, Charli XCX and (repeat offender) Christine and the Queens. Memo to artists: Just say “Hello, Electric Picnic! ”

We know it can happen, but two cancellations – Philip King and special guests on Saturday, and Cathy Davey and Neil Hannon on Sunday – at Mindfield’s Manifesto stage really disappointed queues of people.

With the exception of Emilie Pine and Sinead Gleeson (Best discussions, above), what happened to all the writers? They were very much missed.

It’s great that Electric Picnic is trying to become a more sustainable festival, but its bars’ reliance on single-use plastic cups was mind-boggling. True, they were made from recycled PET, and they kept an army of entrepreneurial youngsters busy collecting them all weekend, to cash them in at a rate of €1 for every five they handed in. But it would surely be better to introduce reusable ones.

Every bar accepted contactless payment, but not enough food vendors did.