Richard Ashcroft at Electric Picnic: 'I’m so happy to be let off my leash in Laois'

Review: The singer harks unashamedly back to The Verve’s glory days in a big-hearted set 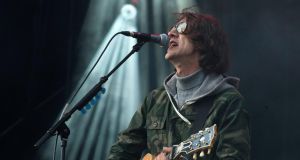 Main stage
★★★★☆
Back when Coldplay, Kodaline and Snow Patrol were in short trousers, Richard Ashcroft and The Verve were the original of the anthemic-rocker species. They were huge for about 10 minutes, only to fall apart for the traditional reasons (bickering, egos, Ashcroft’s attempt to make the Britpop-era curled mullet a statement look).

The singer is now 47 but still a fighting-fit channeller of Everydude hopes and fears. And he harks unashamedly back to his former band’s glory days in a big-hearted pre-suppertime set.

“I’m so happy to be let off my leash in Laois,” he shouts, adding. “This isn’t f***ing Dublin.” Has he caught wind of the grumbles about the procession of artists addressing Electric Picnic as if it were 80km up the M7?

The smashes start early and keeping coming. Ashcroft’s opener, Sonnet, is Oasis if they’d stayed in touch with their sensitive sides. Lucky Man is a slice-of-life rock-out from an artist who croons about getting through the day as if it were a noble victory over impossible odds.

His expansive voice is, as per his pledge, unleashed on his solo track A Song for the Lovers. But the final day of Electric Picnic is neither the time nor the place for foisting “new songs” on an audience. Wisely, Ashcroft stays in greatest-hits setting throughout.

Bitter Sweet Symphony, The Verve’s enduring singalong, is the thrilling, chilling closer. “Come f***ing on!” Ashcroft yells. You can tell he means it, as he has whipped off his camouflage jacket. (The mirror shades and grey hoody remain in place.)

All around, men, women, children, livestock, inanimate objects etc are putting their arms around each other and bawling the words. As well they should: they’re witnessing one of the weekend’s spine-tingling moments.

Life after coronavirus: will we emerge as better people?
9