The 1975 at Electric Picnic: Frontman Matty Healy is the star of Saturday night

Review: ‘We’re the greatest rock band in the world and we’re not even a rock band’ 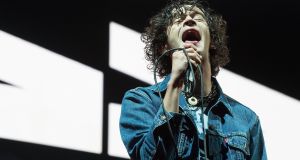 Matt Healy of The 1975 performing on the main stage at Electric Picnic 2019. Photograph: Dave Meehan for The Irish Times

In recent years, The 1975 have established themselves as some of the most compelling commentators on the present state of the world.

Their Electric Picnic set kicks with their new song People. Sonically, it’s an abrasive number at odds with the lush synth pop they’re best known for. The song is intended to serve as a call to arms to young people to wake the hell up and bloody do something. You have our attention, lads. Continue.

Normal service quickly resumes and the audience is treated to some of their signature hits, including It’s Not Living (If It’s Not With You) and I Always Wanna Die (Sometimes).

Politics are never far away, though. “We need to band together not just to fight the rise of the right wing, but to not get set on fire,” frontman Matty Healy tells the crowd. At one point, they broadcast a message from climate change activist Greta Thunberg.

Later, they perform last year’s Love It If We Made It. The song is a sort of modern-day We Didn’t Start the Fire, which references everything from Donald Trump’s tweets to the refugee crisis. It’s one of the night’s standouts.

That’s not to say it’s preachy. In fact, there’s something endearing about how sincere it all is and it’s difficult not to get swept up in the swoonworthy saxophone solos.

Visually speaking, this is a technicolour feast that never overwhelms the show. Think neon lights and busy backdrops. The true star of the night, however, is Matty Healy. As a frontman, he’s second to none, as liable to make a self-deprecating remark as he is to thrust his hips without making you feel scarlet for him. “We’re the greatest rock band in the world and we’re not even a rock band,” he tells the crowd. And you know what? You almost believe him.