The Wha at Electric Picnic: Classic punk-pop spiked with The Strokes

Review: The Kilkenny four-piece carry off their set with no small panache 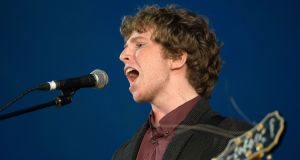 Cosby stage
★★★☆☆
Bunches of mates, curious family members, stray waifs looking for some respite, a few interested music-industry people hoping to be impressed: such is the current landscape for the Kilkenny band The Wha. Still in their teens, and with a debut single, Innocents, just released, the four-piece band were signed by a UK-based indie label a few months ago, so right now it’s really all to play for. For a band so young to have influences that date back to the late 1970s isn’t as novel as it used to be. What makes a difference is that, much like the music they are influenced by, there are no airs or graces about anything they do; instead they have a staunchly determined attitude to just get the job done. Musically, we’re talking about classic punk-pop – Jonathan Richman, Squeeze, The Jam, early Elvis Costello – spiked with the likes of The Strokes and The Vaccines. Not by any means templates for a new movement, the songs at least zip by with no small panache. Whether or not we have experienced the real Wha or the provisional Wha remains to be seen. Whatch this space?

Britain and Europe in a Troubled World: A wise guide to Brexit
7

Margaret Cho: ‘Comedy is still the best decision I ever made in my life’
Real news has value SUBSCRIBE