A Kilkenny teen band, a bewitching sonic machine, and the original pirate materialist 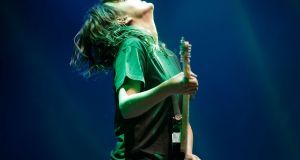 With the exception of a few ragged demo tracks on Soundcloud, and sporadic gigging, this Kilkenny teenage band are keeping their powder dry. They recently signed to the highly reputable UK indie label Chess Club Records, which will oversee the release of their much-anticipated debut single within the next few weeks. Think taut punk-pop à la Arctic Monkeys crossed with very early Elvis Costello.

The music of the Japanese-born US singer and songwriter Mitski Miyawaki packs a real punch, yet there is such an underlying sense of intimacy and emotion in her songs that sometimes you’re not sure whether to engage or resist. Ultimately, of course, you succumb - Mitski’s work is too strong to escape from, too stimulating to ignore, too smart to deny.

At a Florence + the Machine gig in Edinburgh two weeks ago a couple got engaged on stage. Beware, Electric Picnickers, the music of Florence Welch – who arrives at Stradbally celebrating the 10th anniversary of her debut album, Lungs – has the power to bewitch. Indeed, Welch has made certain of it, such is the potency of her dramatic, emotive music and her commanding stagecraft.

Back recording and performing as The Streets, following a six-year hiatus, Mike Skinner fundamentally shaped British hip-hop in the Noughties and is currently prepping a collaborations/duets album. Little if any of that will surface during his EP show, however. Instead, he will fillet material from The Streets’ first two urban realist albums, Original Pirate Material (2002) and A Grand Don’t Come for Free (2004).

An argument doing the rounds contends that rock’n’roll doesn’t necessarily need to reinvent itself as long as songwriters insert enough individuality into their work. Enter Australia’s Courtney Barnett, who has made something of a reputation for herself as a Dylanesque mistress of the contemporary indie rock song. “You just don’t quote a Courtney Barnett song,” remarked Rolling Stone. “You recap it.” Indeed.