Women in Irish pop: Why aren't they topping the bill?

Local music seems be an all-male affair, but some female musicians are pushing back 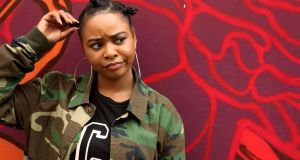 Soulé: despite international pop successes like Ariana Grande, Beyoncé and Billie Eilish, it’s incredible that artists like Soulé and Laoise are still struggling to be heard

Last April, close to 70,000 people streamed into Dublin’s 3Arena across five nights. They weren’t there to see a Drake, Ed Sheeran, Beyoncé, Taylor Swift (or Garth Brooks) residency. Instead, devotees of Athy band Picture This gathered for a stadium tour of epochal proportions, a coronation. This moment, which surprised those whose listening habits don’t extend to daytime radio, was in fact entirely unsurprising given the nature of Irish pop today.

Collectively, groups like Picture This and Kodaline, coupled with troubadours such as Gavin James and Dermot Kennedy, hold what amounts to a monopoly on visibility and commercial success in Irish pop. All, plainly, are men. This is especially jarring considering Ireland’s enviable tradition of popular women in music, from Enya to Sinead O’Connor, Samantha Mumba to Dolores O’Riordan. In or around this welcoming world of soft guitar plinks and soulful crooning, of modest storytelling and folksy campfireisms – a world indebted to TV talent show factories and superstars like Ed Sheeran – there appears little space for female artists to be given seats at the top tables.

Scanning an Irish festival line-up for homegrown female acts needn’t be so laborious, and tokenistic gestures are common. For every Niall Horan, there’s a Stephanie Rainey; for every Gavin James, there’s an Áine Cahill; for every Hozier, there’s a Lyra; for every band like The Academic there’s a Wyvern Lingo. Precisely nothing should be taken away from male acts – to do so would only denigrate years of unheralded toiling – but there is, blatantly, a system that favours and trumpets maleness at the top end of Irish music. The optics, simply put, are bad.

“It’s difficult to ignore the concentration of male acts around the upper echelons of Irish music, and the wealth of incredibly talented female musicians who don’t seem to break through the small-venue scene,” says singer-songwriter Eve Belle.

Sheeran’s unspectacular boyishness has emboldened many young adherents and copycats: typically genuine, rugged, occasionally blokey men who are disproportionately white. Musically, the results are a combination of soul-searching balladry and earthy stadium rockism, washed down with light EDM or electronica. Sorely unheard until they independently break through, an artist like Soulé is one of several new voices in a persistently white male milieu pushing Irish pop in new directions.

Pop music is a massive marketing game, and the majority of the time, the machines are directing the marketing at women

“The tradition of the bard with a guitar, or rock band, is more immediately palpable in male form. Pop music is a massive marketing game, and the majority of the time, the machines are directing the marketing at women,” says Cowley.

What’s new, though, is how these young male singers have managed to pull in large numbers of male listeners. The songs, and how they are marketed, no longer rely exclusively on tugging at female heartstrings, treading the line delicately between unabashed romantic gestures and ungendered, everyday relatability. The appealing ordinariness of these balladeers, visually and lyrically, lends itself to a wider marketability.

It’s obvious from the charts that Ireland is far from hostile to uncompromisingly glittery pop made by women such as Ariana Grande, Pink, Mabel and Billie Eilish. It begs the question: where are the homespun incarnations of this modern pop reflected in our charts? Soulé is an obvious stand-in, Laoise another. But worryingly, no female act or group with a female member found themselves in 2018’s highest-selling Irish albums or singles list, Irish Recorded Music Association (Irma) figures show.

Áine Cahill, who records neatly polished, electronica-embellished pop songs not too dissimilar from the likes of Picture This, believes that there is an inherent industry bias towards guitar-slinging male singer-songwriters. She commends various radio stations for supporting her, but, as Cahill sees it, “there needs to be more of an effort to take risks and support the artists who don’t necessarily fit the current mould.”

Irish radio, even in the age of disruptive streaming services and instantaneous viral fame, still wields great power. Artists are made or broken by those who oversee playlisting as much, if not more than, DJs themselves. According to singer-songwriter Ruth-Anne, who has co-written hit songs for pop stars like Britney Spears and One Direction, supportive DJs not having full autonomy over the music played is a problem.

“Women may seem to be struggling and that is because they are; they aren’t told from a young age that they can be rock’n’roll stars, or how they can pursue a career in music,” explains Kate Brennan Harding, a radio producer for two music-based shows at Today FM who acknowledges the disparity at the top of Irish music.

Elsewhere at Ireland’s state broadcaster, Alan Swan, head of music at RTÉ 2FM, a channel arguably responsible for steering the pop conversation, rejects any suggestion that the fact men fill most roles similar to his across the country has any effect on the promotion of non-male acts. Simply being prolific, he offers, leads to more airplay. At 2FM, you’ll find one of Irish radio’s most well-known voices, Tracy Clifford, who plays a variety of cross-genre pop during her weekday slot. Clifford does not think that the Irish industry skews favourably toward male acts, arguing that those perched on Irish music’s top tier are there because of their consistency, their industriousness and, invariably, due to music’s subjectivity. “It’s all about work. There’s no gender bias,” she says. “If more women put themselves out there, more women would be in the music industry.”

It’s quite difficult for women, who diverge by nature from the rugged-white-man tradition, to access the same levels of success

Taste is something personally held and subjective, the ancient truism tells us. But it is too simplistic an explanation, argues sociologist and music industry expert Dr Michael Murphy, to explain away current pop trends. “I never blame the audience. They go to see acts that they have heard about via friends or the media. And if an act gets lots of airplay and promotion then, inevitably, they’ll find an audience.”

Murphy, a lecturer at the Institute of Art, Design and Technology in Dún Laoghaire who has studied the Irish music industry for over a decade, says he is convinced that, globally, Ireland’s current female and non-binary acts could sell in large quantities.

Female artists may, tangentially, be pop in global terms, but because they don’t carry a guitar or fit into a certain orthodoxy, they can be pigeonholed and seen at home as genre artists, “quirky” or “weird”.

“Styles that diverge from this norm are automatically considered alternative or a little more challenging, thus it’s quite difficult for women, who diverge by nature from the rugged-white-man tradition, to access the same levels of success,” Belle says.

Irish women do, of course, receive support and encouragement from their male counterparts and industry figures. Even so, Belle notices women abandoning their careers having been disheartened by a lack of representation.

Finding a solution is far from straightforward. It would require an admission of an unequal system both from those within the industry and from the Government, many of the artists I’ve spoken to agree. Merely asking probing questions about the status quo often provokes knee-jerk reactions from those with vested interests. “It’s a lot easier to say ‘it is what it is’ rather than seek out any underlying causes or place any blame,” says Belle.

Murphy, who has a forthcoming book about Irish pop, distrusts quotas and is sceptical of their ability to guarantee quality. He is insistent, however, that the Irish music industry has reached a crisis point, failing to deliver a respectable proportion of Irish acts – women in particular – to the charts. Some meaningful solutions, such as a voluntary tax on the industry until a gender balance in both executives and artists is achieved, would be resisted, he says. Karen Cowley, meanwhile, believes the Irish Government should do more to support women in music – or, for that matter, modern Irish music in any form.

The Irish music industry, an umbrella term for various mini-industries, is ailing, spiritually and creatively. More upbeat than most is Michaela Hayes, music co-ordinator and daytime DJ at iRadio, who contends that the gender imbalance is becoming “less and less evident” in Irish pop, saying 2019 may be seen as the year things truly progressed for Irish women in pop. She may well be right but, in order to address gender issues, it is clear that platitudes are not enough; more women and non-binary people must be encouraged to become record label staff and producers and engineers. This idea of change from within is beginning to gain traction through groups such as Girls Rock Dublin and Shesaid.so, globally connected organisations emerging to tackle the overt maleness of the music industry.

Ailbhe Reddy, an artist who writes folksy pop that in another dimension might chart, proudly volunteers with Girls Rock.

“I definitely think that things like that can help get women involved in music,” says Reddy, rhapsodising about the groundwork the group does, which includes encouraging girls and non-binary teens to get involved in music by providing spaces and equipment. “This will improve intersectional representation over time, combined with conversations about why everyone can be a part of music.”