Hozier at 3Arena, Dublin: Everything you need to know 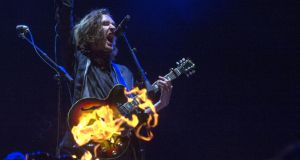 Hozier: expect some new songs mixed with crowd-plesaers such as Take Me To Church and Nina Cried Power. Photograph: Dave Meehan/The Irish Times

It has been quite the year for Hozier – the release of a very good second album Wasteland, Baby!; a slew of open-air summer shows in Ireland; a recent residency in New York’s Hammerstein Ballroom; and new material in the shape of the recently released Jackboot Jump, written while on tour as a tribute to protest singers Woody Guthrie and Pete Seeger. More new songs have been flagged for release in early 2020, so it would be safe to say the Wicklow man’s two shows at Dublin’s 3Arena will be an astute blend of trusted highlights and an unfamiliar tune or two. Special guest for these two shows is critically acclaimed UK singer Freya Ridings. – Tony Clayton Lea

On Tuesday and Wednesday at 3Arena in Dublin.

Both concerts appear to be sold out, with no tickets available on Ticketmaster. Concertgoers are advised to buy tickets from accredited sources only.

What time should I arrive and what are the stage times?

Doors open at 6.30pm. Support act Freya Ridings will take to the stage at about 7pm, with Hozier expected on about 8pm.

In pictures: Hozier
live in Dublin

Parking is available in the Point Village car park (you can book through Ticketmaster for €13.85), but better to leave the car at home and use the Luas – get off at the final stop of the red line, the Point. There are usually extra trams on show nights. The last Luas is scheduled to leave the Point at 12.30am on both nights.

What will Hozier play?

Here’s the set list from his concert in New York on November 26th, the final night of his residency at the Hammerstein Ballroom. Along with Jackboot Jump, Hozier sang The Wages, the first live outing for the song.