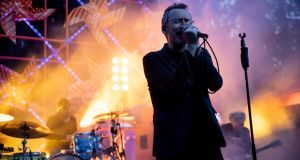 Faith No More are to headline Sunstroke, a new alternative-rock festival at Punchestown Racecourse, in June 2020.

The California band, who had hits in the late 1980s and early 1990s with Epic, Midlife Crisis and Easy, will be joined by the influential Scottish band The Jesus and Mary Chain, the Grammy-winning Deftones, and the French death-metal quartet Gojira at the Co Kildare venue over the weekend of June 13th and 14th.