Freya Ridings: ‘I wasn’t cool when I was younger. No one wanted anything from me’ 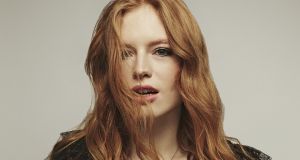 The “Titian-maned Goddess of acoustic pop” – as one UK magazine extravagantly dubbed her – is having none of the pomp and circumstance that is currently surrounding her. This makes perfect sense, for UK singer and songwriter Freya Ridings is as down-to-earth as they come. Such a demeanour stems, she implies, from spending much of her childhood and early teenage years removed from crowds and, initially at least, performing in front of fewer than 10 people. If that doesn’t ground you, infers Ridings, then nothing will.

Ridings first had an inkling of what she wanted to do with her life when she scrawled a picture of a violin on a piece of cardboard and then pretended to play it. Her parents, she says, didn’t know her interests lay in music until they saw the drawing. Cue violin lessons. “I realised, however, that you can’t sing when you’re playing the violin – or at least I can’t – and as that aspect of performing is important to me I shifted to the piano.”

There was no going back from this point on, she recalls. Very quickly, music became her solace and protector. The need to sing and play piano or guitar became compulsory. She admits to needing to sing every day. “Sometimes, when we’re on tour, I’ll find an empty room or a corner and I’ll just sing. It heals something in me, be it some kind of isolation or loneliness. It’s really quite beautiful that singing can do that.”

Adele was a huge inspiration to me, and her success really did make me continue what I was doing


It is, indeed, but what it also highlights for 25-year-old Ridings is a coping mechanism to offset the period of time when she was bullied as a schoolgirl. She says she began to write lyrics and songs at the age of 11 because, she underlines with a sigh that’s half exasperation, half bemused, “you can imagine a girl with red hair and tall for her age”.

Struggling at school academically because of severe dyslexia added to the general mistreatment from other children. Her teachers were more forgiving. “Going to the piano room and just writing became a thing I did during any stormy time in my life. For anything heart aching, or losing friends, things like that, it was the piano I always turned to.”

Listening to Ridings talking, it is clear her early school years were close to, if not actually, a living nightmare. She is forever thankful that she grew up surrounded and supported by a loving family.

“I was brought up with empathy and creativity at the heart of the family,” she remarks. “I was quite a different child, I felt isolated. In time, that level of being with yourself crystallises who you are, and you can see what other people are without being blinded by what they want from you. I wasn’t cool at all when I was younger; no one wanted anything from me. To an extent, you can see past certain elements of people, and you can empathise when people have that loneliness in their own lives.”

Matters changed for the better when Ridings joined the BRIT School for Performing Arts at the age of 16. Quickly enough, she found her clan. Not only that, but attending the same school as Adele, Kate Nash, Amy Winehouse, Leona Lewis, Katy B, and Jessie J (all of whom had either graduated or departed prior to her arrival) stimulated ambition and creative focus. Leaning towards the melancholic and expressive – much like her major inspiration, Adele – she sensed the commercial pop music market was becoming more accepting of female songwriters unafraid to explore deeply personal issues.

“Adele was a huge inspiration to me, and her success really did make me continue what I was doing. At the same time, playing piano ballads was the furthest thing from cool. When I got signed, however, the label [Good Soldier] took a real leap of faith in doing so because major labels certainly didn’t. That aside, having strong female lyric-writing role models while growing up meant so much to me. It’s something I’m so passionate about now, showing young girls that they can absolutely write their own songs.”

A significant turnaround in her career arrived this time last year, when a hitherto obscure song of hers, Lost Without You, was featured on the reality television show, Love Island. Within weeks of the song being aired, Ridings knew she was saying goodbye to years of being viewed as an oddity.

Without any sense of triumphalism at all, she says her success over the past 12 months has not only validated but also removed her from the isolation she experienced as a much younger person. It is in many ways, “a massive thanks to the people that supported me through those times – my family always grounded me and told me that it was possible for a young girl to write songs totally on her own. The music industry told me quite the opposite, which was that I have to write happy songs, I have to write the kind of songs that would have a chance of getting played on the radio or being picked up by streaming services.”

There were times, she adds, when she didn’t think music was going to work out for her. “It has taken so long to get to where I am. I have spent so many years in a kind of wilderness, working away and writing, playing gigs on my own, with very, very little happening. I’d play gigs where sometimes there would be, literally, two people in the room. They were lovely, but two people! I remember almost apologising for being there.”

With a slight but no less distinct edge to her voice, Ridings reveals that every time she looks at the Platinum discs on her wall, she remembers “those days of just sitting on a school bench on my own and no one wanting to be my friend. I’m pretty sure no one ever thought of me doing anything like what I’ve done in the past few years.” These are the dreams that keep us going in the dark times, she observes, “and now I’m here living it. Sometimes, I really do have to pinch myself.”

Is it weird to think that the young, different and lonely youngster she was is now quite the successful songwriter and performer? I ask would the 11-year-old Freya Ridings have believed it for a second? Her reply arrives with a gasp.

“Oh, God, what I’m doing now and have done for the past while is everything my 11-year-old self was dreaming of and visualising. I know that was the age where I told myself to hold on to those dreams and never let go.”

While her 11-year-old self, she admits, would have been optimistic, the 21-year-old version wouldn’t have been. It takes, she suggests, the oblivious risk-taking bravery of a younger person to make a bigger impact than someone who is older and perhaps more disheartened.

“I suppose the younger me had the courage to stand up in a room of adults and play songs I’d just written. Everything changed by taking one of those cliff dives.”

“The beauty of songwriting is that you can always find something you feel strongly about, always find that kind of depth. When you sit down at the piano, whether you’re missing your family, missing friends, the issues of having or not having love interests – I travel so much I feel it isn’t really fair on another person to put them through the weeks and weeks away – there is always something you can find to process and create songs. Another thing is that with some people you meet, even briefly, there can be degrees of intensity you can write about.”