Hozier at Electric Picnic: Stirring homecoming from an Irish star

Review: ‘I can’t put a name on being in front of a home crowd,’ says an emotional Hozier 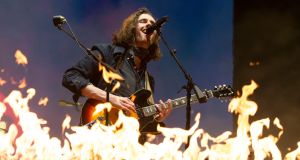 Electric Picnic 2019: Hozier, who can justifiably lay claim to being Ireland’s biggest rock export this side of U2 and The Cranberries. Photograph: Dave Meehan

Main stage
★★★★☆
Time flies when you’re number one. The last time Hozier played a headline show on the Electric Picnic main stage he was an up-and-coming singer-songwriter with one huge hit – Take Me to Church – in his sails. Five years later he returns with a US-chart-topping album to his credit. (It went to number one in Ireland too, obviously.) He can plausibly lay claim to the title of the country’s biggest rock export this side of U2 and The Cranberries.

It’s a stirring homecoming from the Co Wicklow singer. With darkness having definitively descended, he opens with Would That I. Half-chanted, half-sung, it’s one of the more storming numbers from his second album, Wasteland, Baby! He sings into the teeth of an invisible gale, his band summoning sheets of noise.

He’s come to play as well as beseech. Angel of Small Death and the Codeine Scene, perhaps his best song, is a gothic caper that fizzes with baroque glee. It’s Emily Dickinson trapped inside an anguished power ballad, which turns out to be exactly what Electric Picnic is in the mood for. “I can’t put a name on being in front of a home crowd,” he says, his voice pulsing with emotion. It’s obviously a big moment for him – as is a duet later with Lisa Hannigan.

Hozier is photographed deep underwater on the cover of Wasteland, Baby! With the rain holding off, the good news is that he is spared re-creating the shot at Electric Picnic. But dark clouds are acknowledged as Hozier croons his lungs out on Nina Cried Power. It’s a song about standing up to oppression and powerful figures trying to keep you down. “I want to say thank you to everyone who is making Ireland what it is,” he declares by way of introduction. “I love you.”

He wrote it in the shadow of the election of Donald Trump. Here and now, with Ireland staring down the barrel of a hard Brexit, it feels more relevant than ever. As everyone sings along, the chorus rises into the Stradbally night.