As he turns 80 on Sunday, the individuality of character of the superstar flautist is undimmed 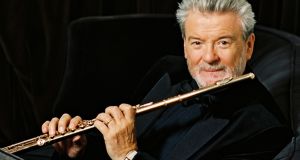 James Galway: His readiness to speak his mind extends to the banter he likes to engage in with his audiences

James Galway will turn 80 on Sunday. But the RTÉ Concert Orchestra got in early and held its celebration at the National Concert Hall last Wednesday. Galway has been a huge international presence for most of his life. So it’s salutary to remember that there had been no superstar flautist on his level before he arrived on the scene.

Yes, there had been great flautists before he began his solo career in the early 1970s. But none had ever reached the point of becoming an internationally recognised household name.

There’s no obvious contender waiting in the wings to fill the gap when he finally hangs up his flute. And he seems set to hold on to the instrument for some time to come. He’s got a Birthday Gala at the lakeside KKL Lucerne in January, and further concerts have been announced up to the end of March.

I’m sure it’s the fantasy of many a young player that they will somehow end up with a career of similar magnitude. But 30 million album sales is a tall ask, and there’s a lot more than flute-playing involved in reaching those dizzy heights.

The famous story of his audition for the post of principal flute with the Berlin Philharmonic Orchestra tells you a lot about his character. A delayed flight made him late for the audition, and when he arrived he was told it was too late for him to be heard. He persisted, but it took all his persuasive powers to make sure he would even get to play.

He was put through the wringer by the orchestra’s then principal conductor Herbert von Karajan. He was forced to perform challenging orchestral excerpts from memory, and then invited to play in a line-up with the other shortlisted flautists. When he was offered the job his response was to say that he would “think about it”.

He didn’t like the way he had been treated and, eventually, rather than agree to the normal year’s probation he said he would come for a month and if he liked it he would stay.

His readiness to speak his mind extends to the banter he likes to engage in in front of audiences. On St Patrick’s night in March 1983, he was vocal about what he saw as the shortcomings of the newly-opened Roy Thomson Hall in Toronto, Canada.

He stopped playing a number of times to complain about the acoustics. He complained again when the air conditioning blew the music off his stand. And finally when an audience member shouted for him to shut up and play, he countered with, “you’ll have to speak up. The acoustics are so bad I can’t hear you”.

His sharpness of wit was well in evidence on Wednesday, and he was happy to encourage some of his guests to tell stories against him. Jazz flautist Brian Dunning’s mother obviously made a huge impression through her total indifference to the fact that she had the world’s best-known flautist in her house.

It would be misleading to suggest that his playing has survived the ravishes of time without blemish. But the individuality of character is undimmed, and he can still deliver his trademark combination of tonal intensity and breathtaking brilliance.

And since he spends much of his time these days on charitable and educational work, it was good to see students from the Galway Flute Academy join players from the Royal Irish Academy of Music and Music Generation to fill the front of the stage in David Overton’s Galway Fair at the end of the evening.

One of the key differences between performers and composers is that only the performers have to deliver what they do in real time. Composers can write and rewrite, revise and delete, and then throw everything into the bin if they don’t like what they’ve written.

On first principles, then, it has to be easier to be an octogenarian composer than an octogenarian performer. John Kinsella, who turned 87 last April, was the recipient of this year’s National Concert Hall Lifetime Achievement Award, which Galway was presented with back in 2013 as a mere stripling of 74.

Kinsella is now famous for having written more symphonies than any other Irish composer. He completed his First in 1984, when he was 52, and his Eleventh was premiered by the RTÉ National Symphony Orchestra under Jean Deroyer on Friday, the day he was presented with his award.

The striking characteristic of the new symphony, as of Kinsella’s other symphonies, is the feeling it gives of pared-back clean energy. It never seems to want to dwell in the moment, but to be always heading for a goal. Wherever you are now seems of less concern than the ultimate destination.

Sketches left by Finnish composer Jean Sibelius which may have been intended for a never-to-be-completed Eighth Symphony were the spur for Kinsella’s latest. His grá for Sibelius would be evident even without such a direct connection, and the impact of Anton Bruckner’s build-ups can also be felt. On a first hearing the new symphony doesn’t have quite the individuality that marked out the Tenth. Time will tell.

Conductor Jean Deroyer’s neat performance was followed by two other three-movement works, Prokofiev’s Third Piano Concerto in which soloist Vadym Kholodenko used his virtuosity to leave a heavy personal imprint on the music, and Sibelius’s Third Symphony, which Deroyer viewed as being deep, the romantic shadow of the composer’s Second rather than the lighter, more elliptical work that it actually is.