Cork Guinness Jazz Festival to kick off with funeral procession 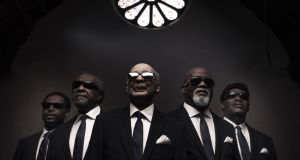 The Blind Boys of Alabama will play the 2018 Guinness Cork Jazz Festival.

Jazz aficionados heading for Leeside this year are in for a novel treat when the Guinness Cork Jazz Festival kicks off with a meeting of Halloween and New Orleans in the form of a musical funeral procession through the city centre.

Festival director Sinead Dunphy explained that the Dia De Los Muertos parade scheduled for Thursday, October 25th, is designed to get fans in the mood for a weekend of jazz which will see how up to 1,000 musicians from 20 countries play in some 70 venues around the city

“The Dia De Los Muertos Jazz Parade is a bright and colourful spectacle that will roam through the streets of Cork bringing with it the alluring dance of the macabre in a nod to Mexico’s famous Day of the Dead Parade,” she said.

“It will include street performers and floats from Cork City Art Link who will partake in a New Orleans funeral procession with live improvising jazz musicians paying homage to the greatest artists of jazz gone from this world and it promises to be the perfect start to Halloween season and the Jazz.”

Back in the bars, hotels, galleries, theatres and other venues, jazz fans can look forward to an eclectic mixture with multiple Grammy award winner, Maria Schneider and her Orchestra sure to prove a huge draw for their first ever Irish appearance, said Ms Dunphy.

“We also have the legendary Blind Boys of Alabama along with US Jazz singer and composer, Nnenna Freelon, who has performed and toured with such top artists as Ray Charles, Al Jarreau, Anita Baker, Aretha Franklin, Diana Krall, George Benson and Herbie Hancock, ” she said.

“We also have Belfast jazz evangelist Linley Hamilton appearing - he presents Jazz World with Linley Hamilton on BBC Radio Ulster as well as leading his own jazz quartet and he’s played with people like Van Morrison, Jacqui Dankworth and Paul Brady so he should prove very popular.”

Tickets for the headline acts will go on sale May 31st but there is also plenty of free entertainment including fringe events such as Swing Dance Classes, free Jazz on the Plaza open-air gigs, flash mobs, a Swing Jive, and a Secret Jazz Trail as well as Jazz Bites food festival.

According to Ms Dunphy, a full headline artist line-up, details of the free music and entertainment programme and Fringe events will be announced in the coming weeks. For updates visit www.guinnessjazzfestival.com.