Committee has not convened this year and is being ‘ignored’ by Minister, says Fianna Fáil 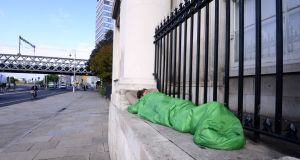 There were 9,681 people recorded as homeless in March. Photograph: Cyril Byrne/The Irish Times

A committee established by the Department of Housing and charities to help resolve the homeless crisis has met on only two occasions in the last 2½ years.

The National Homelessness Consultative Committee assembled once last year and also in 2016 despite the mounting crisis.

The forum was established in 2007 to co-ordinate the main housing and homelessness charities and the department. The committee met every three months in 2014 and 2013, according to figures obtained following a parliamentary question from Fianna Fáil housing spokesman Darragh O’Brien.

The committee has not convened so far this year and is being “ignored” by Minister for Housing Eoghan Murphy, said Mr O’Brien.

The committee’s purpose is valid, he said. It exists to “make sure there is proper co-ordination” in responding to the crisis. The department “don’t see the importance of it” but homelessness charities “have got to be listened to”, he said.

Spokeswoman for Dublin Simon Community Niamh Randall said it was deeply disappointing that the meetings have not been more frequent. She said the forum brought together “all the key players across the issue” and helped raise problems or identify emerging trends in homelessness early.

“Sometimes difficult conversations were had, too much consensus isn’t always a good thing” said Ms Randall, adding it had never been more important that the grouping comes together.

There were 9,681 people recorded as homeless in March, a decline from the 9,807 recorded the previous month. However nearly 600 people were removed from the statistics and reclassified as no longer homeless. The individuals were living in houses and apartments, in some cases paid for by local authorities using funding provided to tackle destitution.

Ms Randall said given the concerns surrounding the figures it was “timely” that the committee should meet to work through the issue.

Last September Mr Murphy established a homeless inter-agency group comprising officials from several State bodies and departments. The group had a day-long meeting in April with in excess of 20 housing and homelessness groups, added the spokesman.