Baptism barrier: ‘If Damien from The Omen turned up, we’d take him in’ 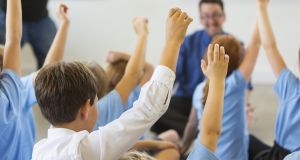 The General Secretary of the Catholic Primary Schools Management Association says the removal of the Baptism Barrier is not necessary as the provision of extra schools has already addressed the problem of the shortage of school places. Photograph: iStock

The General Secretary of the Catholic Primary Schools Management Association says the removal of the Baptism Barrier is not necessary as the provision of extra schools has already addressed the problem of the shortage of school places.

Seamus Mulconry told RTÉ’s Morning Ireland that the changes in the law agreed at a Cabinet meeting yesterday are redundant.

“The issue is the lack of school places, not religion. Ninety-five per cent of schools are not over subscribed.

“The Minister announced he is building 16 new schools. He’s solving the problem, so I don’t know why there is a need for this.”

Mr Mulconry said that Catholic schools want to accept everyone who applies and they do so when there are sufficient places.

“This is not a massive deal for us. Even schools that are oversubscribed take non-Catholic children under the sibling rule.”