Mixed reaction to Budget 2020 from the arts sector 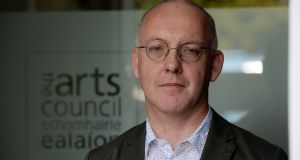 The National Campaign for the Arts has said it is “devastated” by Budget 2020 and feels that the sector is being left behind again.

The body, which represents 1,000 artists and arts bodies, said it had anticipated a 15 per cent increase in the budget in line with the commitment of the Government to double funding in the sector within seven years.

Campaign chairwoman Angela Dorgan said the increase in the Arts Council budget from €75m to €80m “feels like a standstill”.

She said the sector had been optimistic in its pre-budget submissions that the Government would increase funding for the arts in line with its commitment to double spending by 2023.

However, the Arts Council has praised the budget, saying it is pleased that its allocation has been increased. The hike includes €1.25 million in additional funding to support performing artists, arts festival and street arts and €3.75 million for traditional arts, culture night and creative schools.

Arts Council chairman Professor Kevin Rafter said: “Given the very difficult budgetary environment in the context of Brexit, the Arts Council is pleased with the announcement of €80m in funding for 2020.

“This investment will allow the Arts Council to continue its work in supporting artists to develop their practice, enabling organisations to create work of excellence and allowing people across the country have access to high quality arts experiences. We look forward, once the Brexit uncertainty has been resolved, to continuing discussions with Minister [for Culture Josepha] Madigan on increased funding for the arts”.

However, Ms Dorgan said the increase was not enough to ameliorate the cuts that the sector experienced as a result of the last recession.

“Our whole pre-budget submission was projected on funding being doubled in five years and then that was moved out to seven years. It feels like a massive cut,” she said.

“The afterthoughtness of it all is devastating to the sector. The actual increase is €3 to €4 million. Even a five or six per cent increase will not make its way to art workers.

“We are going to need to win the global lotto to get anywhere near the figure needed. It feels like the arts are a patsy again.”

The Department of Arts, Heritage and the Gaeltacht’s budget overall has been increased by 5 per cent to €354 million.

The department says it amounts to a 17 per cent increase in spending over the last five years. The total funding increase for 2020 is €7.2 million in capital expenditure and over €8 million in current expenditure.

Following funding of €6 million in 2019, an additional €1.1 million in capital funding is being provided for the European City of Culture - Galway 2020.

Screen Ireland is to receive an additional €1 million. It follows the Government’s decision to extend the Section 481 film tax credit to 2024.

An extra €900,000 is being provided for the Decade of Centenaries 2020 programme which will mark many significant centenaries in the War of Independence including Bloody Sunday and the execution of Kevin Barry.

Total funding for the building and natural heritage sector will amount to €62.5 million up from €54 million last year. Of that €7 million in funding will be used to embark on an accelerated programme of peatlands restoration and conservation work.

Ms Madigan said the budget was based on the “assumption of a disorderly Brexit which would have a significant impact on our economy”.

She said she was confident that the commitment to double funding in the Department by 2025 will be achieved.