‘Did they forget about the Border?’ Clones businesses on the budget

Small enterprises are sceptical about any of Donohoe’s €1.2bn Brexit fund reaching them 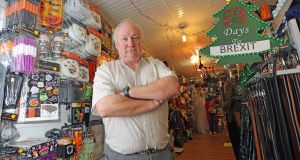 Most of the roads out of Clones, Co Monaghan, lead across the Border.

On Tuesday afternoon this fact is repeated over and over again by people in the town seeking to emphasise the importance of an open border and their concerns over Brexit.

“Fermanagh is our hinterland,” says Patrick McCarville, the owner of the Creighton Hotel in Clones. “More than half our business comes from the North.”

He is watching the budget speech from the hotel bar.

His concerns are not just Brexit, but the extra costs to his business as a result of an increase in the carbon tax, coupled with previous increases in the minimum wage and the VAT rate. “It’s like bang, bang, bang, they’re all hitting the small business person.”

Watching as a €1.2 billion Brexit package is announced by Minister for Finance Paschal Donohoe in case of a no-deal Brexit, he is sceptical. “I’d need to see the detail on it.”

He questions how much of this support will filter down to small businesses; he welcomes the specific support for the midlands, but asks “Did they forget about the Border?”

As lunch is served in the hotel bar, many of the diners are equally doubtful.

“We need to know where the money’s going to go,” says Ann McQuaid. “It’s always Dublin, Dublin. They think the rest of the country doesn’t exist.”

She and her brother Pat Mohan have lunch in the Creighton every day. He is originally from Monaghan but lives in Fermanagh and works in Clones. “The smaller communities are always forgotten about.” He gestures towards the television. “This is easy talk, but I’ll believe it when I see it.”

Both remember well the impact of the Troubles on the Monaghan area. “This was once one of the most thriving towns, but when the Border roads closed, Clones closed. We can’t go back to that again.”

Brendan and Gillian Harte agree. “I would hope that the Border towns would receive some of this [Brexit] money,” says Brendan, “but I’d like to see something more concrete. After all, these are the areas that will be most affected.”

“Clones is very derelict-looking,” adds Gillian. “I don’t see much preparation [for Brexit]. I think they’re leaving it until the bitter end.”

Across the street Tony Morgan is preparing for Brexit. “This is my Brexit counter,” he says, pointing to a glowing Christmas tree, which was intended to mark the time until December 25th; the word “Brexit”, typed out in capital letters, has replaced “Christmas”.

The budget speech is broadcasting from the shop’s radio; his immediate reaction is that “there’s nothing for the retail sector”.

His shop, Lipton’s, is best described as a general store; it sells practically everything. The majority of his stock once came from the UK, but Morgan has already reduced this to 40 per cent and, in a hard Brexit scenario, he will eliminate it entirely. “I’m not going through that tariff regime.”

“I would have liked to have seen the VAT rate reduced back to 21 per cent. That would have mitigated any tariffs.”

He is also concerned about the impact of the carbon charges. “I know they’re necessary, but it puts the cost of petrol and diesel up. It will stop people coming in from across the Border altogether, because if petrol is dearer and there’s a narrowing gap in the diesel , they won’t come in at all.”

Eamon McCaughey is the owner of Matthews newsagents in the town’s main square.

“I’m concerned about cigarettes going up,” he says. “It’s a double-edged sword from the government, because it’s driving people away from the legitimate trade and into the black market. I’m selling cigarettes for €13 a pack; on the black market they’re a fiver.

“My cigarette sales are decreasing all the time, year on year, and you can buy black market cigarettes here on the street.”

McCaughey believes there should be more direction from the government.

“We are getting ready for Brexit in any way we can, but nobody knows what’s going to happen, and it’s a scary time.

“There are eight roads coming into Clones, and eight of them are from the North. Clones parish is more in the North than in the South. My wife works in Cavan General Hospital, and from here to there the road crosses the Border several times.

“This area has been left out by previous governments down through the years, and we’re going to be isolated even more here.”