Little Mix at 3Arena, Dublin: Everything you need to know 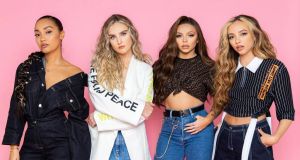 Little Mix are fitting in as many dates as possible to make up for their two-year absence from our shores with three nights at Dublin’s 3Arena and three in Belfast.

Even though Jesy Nelson, Leigh-Anne Pinnock, Jade Thirlwall and Perrie Edwards’s individual auditions on X Factor in 2011 were impressive, they became unshakeable when they were thrown together as a girl group, eventually becoming the first group to win X Factor.

As soon as they released their debut single Wings, it was clear that Little Mix were promoting three things: female empowerment, healthy friendships and body positivity.

A group is a risky thing to be in the pop sphere. When in-feuding or escalating egos can often cut the lifespan of a group down by a few years, Little Mix have managed to stick together, growing stronger with each album. Taking an edgier route with their music on LM5, their 2018 album, after finally breaking free from Simon Cowell’s label Syco, the talented Little Mix women have used their strong vocals to put out an even stronger message.

This is one of the hottest pop tickets in town, and their live show promises to be something bigger and better than ever before. – Louise Bruton

When do Little Mix play?

They will be playing three nights at 3Arena. Tuesday October 8th, Thursday 10th and Friday 11th. Then they are off to Belfast for two concerts, on Sunday and Monday.

Are there tickets left?

Very limited availability. Check with ticketmaster.ie and remember to buy tickets only from trusted sources.

Who is the support act?

The support acts on all three nights are rising star Mae Muller and New Rules , a four-piece who sold out their debut UK and Ireland this year.

Doors will open at 6pm.

Parking is available in the Point Village car park (you can book through Ticketmaster for €12) but better to leave the car at home and use the red-line Luas and get off at Point stop, or take Dublin Bus No. 151 to Castleforbes Road, the closest stop to the venue.

What songs will Little Mix play

Here’s the set list from their September 28th concert at the Palais des Sports, Paris:

Bags will be searched at the door. Bottles, cans, selfie sticks, large umbrellas, iPads and other tablets, video cameras, professional cameras, audio recorders, GoPros, large posters (A3 or bigger), large flags on poles, belt chains, laser pointers and anything that can be deemed a weapon are prohibited. So pack light to keep the wait in line as short as possible.

Are there any age restrictions?

Under 16s must be accompanied by an adult. Standing is strictly over 14s only.