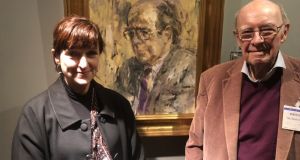 Authors Henrietta McKervey, programmer of this weekend’s Echoes festival in Dalkey, and Gordon Snell, widower of Maeve Binchy, with the portrait of Douglas Gageby, who as Irish Times Editor first hired Maeve as a journalist

On the eve of this weekend’s Echoes festival in Dalkey, celebrating Maeve Binchy and Irish writing, its programmer, author Henrietta McKervey, and Maeve’s widower, Gordon Snell, join me to talk about the thinking behind the festival and the many ways in which Maeve’s memory is being kept alive.

The festival always has Maeve at its heart but each year it has a different theme. This year’s theme is Celebrating Community in Contemporary Writing in Ireland. Last year’s theme was “Maeve the quiet feminist”, a description she loved, says Gordon, as it was the first time anyone ever called her quiet.

McKervey discusses the highlights of this weekend’s festival as well as her experience of being the first winner of the Maeve Binchy UCD travel scholarship, including a hair-raising vist to Fastnet lighthouse.

Snell reveals how he loves to re-read his late wife’s work, which only confirms his admiration for her briliance as a storyteller: “her dialogue is so good it could be put straight on the stage”.

He reminisces about their cameo roles in film adaptations of Maeve’s work, usually in a restaurant or at a bar drinking cocktails served by Stephen Rea, but also in an episode of Fair City.

He also discusses how he manages to write without his former partner – Maeve once described them working together in their upstairs studio at their typewriters as like two pianists performing a duet.

As our interview takes place in The Irish Times office, talk inevitably turns to Maeve’s distinguished career as a journalist here. Snell reveals that his favourite article by her is I Was A Winter Sport, about a calamitous ski trip, while McKervey expresses admiration for Bincy’s versatility as a writer, shifting in shade from reporting sensitively on the Zeebrugge ferry disaster to writing wittily about the British royal family.