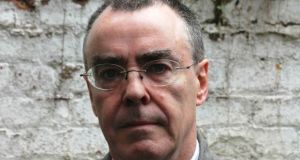 A member of Aosdána and a Fellow of the Royal Society of Literature, he was one of the “Belfast Group” of poets in the 1960s which included Séamus Heaney, Michael Longley and Paul Muldoon.

His publisher Peter Fallon said Mr Carson’s work was “heroic” and it was “not an exaggeration to compare his mapping of Belfast with Joyce’s of Dublin.”

Mr Carson’s son Gerard said on social media that his father had “passed away peacefully” early on Sunday morning “surrounded by his loving family.”

“Such an amazing person who I learned so much from and will miss very dearly,” he said.

Born in Belfast in 1948, Mr Carson published 14 collections of poems, including The Irish For No, Belfast Confetti and The Twelfth of Never.

His prose writings included The Star Factory, a memoir of Belfast, Shamrock Tea (which was shortlisted for the Booker Prize) and a translation of The Táin.

His most recent collection of poetry, Still Life, was due to be published this month.

He was the recipient of a number of literary awards, including the TS Eliot Prize, the Forward Prize for Poetry and the The Irish Times Irish Literature Prize.

President Michael D. Higgins, said that it was with “great sadness” that he had learned of Mr Carson’s passing.

“Growing up in an Irish speaking community, with Irish as his first language, Ciaran’s love of the Irish language lasted throughout his life,” he said. “A prolific writer, his poetry, prose, translations from Italian and French reflected a wide range of achievements.

“An early contributor to the understanding of traditional music, he was interested in all the arts and a generous supporter of other artists.

“He leaves such a wide body of work that people will have their own favourites, including the magnificent Belfast Confetti. Representing Belfast in all its variety, the memoirs and books, such as The Star Factory, revealed a deep love of place.

“Writing right up to the end, with the text forthcoming, he will be missed by all who had the privilege of knowing or reading his work.

“I warmly recall his travelling with us to the isle of Iona in the early days of the Presidency.

The Irish Times books editor Martin Doyle said it was “another great loss for Irish poetry”.

Mr Carson worked for the Arts Council of Northern Ireland from 1975 to 1998, where was responsible for traditional music and then literature.

In October 2003 he was appointed Professor of Poetry and Director of the Séamus Heaney Centre at Queen’s University, Belfast.

Mr Carson had been suffering from lung cancer.

Mr Fallon said that all at The Gallery Press were “devastated” by the writer’s death.

“Since his diagnosis in March he has been heroic,” said Mr Fallon, “but we’re not surprised.

“His work was heroic for the 35 years he and I worked together.

“To edit and publish books such as The Irish For No, Belfast Confetti, Opera Et Cetera, The Twelfth of Never, For All We Know (perhaps my favourite) and, just a year ago, From There to Here: Selected Poems and Translations was a privilege and an excitement.

“There are few better books than his Collected Poems,” he said. “We plan to publish Still Life on October 16th - and we will, with pride and the heaviest heart. But, oh, what fun we had!”

Many tributes were paid to Mr Carson on social media on Sunday morning.

The executive director of Belfast’s Lyric Theatre, Jimmy Fay, said he was so sorry to hear of the passing of the “extraordinary poet” who was “always a warm and brilliant presence.”

“To those of us of a certain generation, reading The Star Factory and Belfast Confetti was a lesson in how to understand the city we lived in,” said writer and producer Hugh Odling-Smee.

Author Jan Carson said it was “a pleasure to have known him, an education to have read him and an honour to have been constantly asked if we were related.”

He is survived by his wife Deirdre and children Manus, Gerard and Mary.