Marginal Notes: The Minister for Finance’s Budget 2020 address was a Brexit-fest 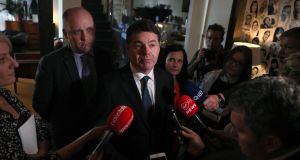 Minister for Finance Paschal Donohoe’s speech was low on ’opportunities’, with the word popping up just four times compared to 13 outings for the less benign-sounding ’risk’.

“It is also the right thing to do for our economy, our society and our citizens for whom Brexit is something they did not choose and had no hand, act or part in. Make no mistake, No Deal will be challenging. But it is a challenge Ireland has the measure of.”

As inevitable as the subsequent queue of lobby groups lamenting “missed opportunities”, Budget 2020 rolled around to complete a trilogy of outings in the hot seat for Minister for Finance Paschal Donohoe. “Minister, you have one hour,” the Ceann Comhairle declared, as is traditional, while Donohoe, as is also traditional, took this as more of a base target than a cut-off point.

This was the Brexit-Bloody-Hell Budget, “developed in the shadow of Brexit” and with the “central assumption” that we’ll be lumped with the no-deal variety. Donohoe began by ramming home one salient point to Boris Johnson and friends. We’re ready for Brexit. Are you?

“Bold decisions are needed on our investment priorities but also on taxation and regulation. Carbon pricing is part of this. There is cross-party support to increase the price of carbon from €20 today to €80 per tonne by 2030... I know that this will not be easy for everyone.”

Brexit is just the immediate threat. There’s also the “defining challenge of our generation” to address before the floods come. After weirdly doing nothing on this burning topic last year, it was a steady-as-the-planet-goes increase of €6 per tonne in carbon tax (not the €10 that was previously mooted), while its application to household fuels was pointedly postponed until after the election / winter.

The “not easy for everyone” part refers to the toll on rural area employment from the potential closure of power stations, with the result that the Government will now appoint a new commissioner for the Midlands to sort everything out.

“If the economic impact of a No Deal is more severe than forecast, I am prepared to use resources that would otherwise have been dedicated to the Rainy Day Fund. The rationale for the Rainy Day Fund is to accumulate funding that can be deployed in the event of an adverse shock to the economy.”

A disorderly Brexit is our rainy day, Donohoe effectively said. He’s not quite raiding the Rainy Day fund just yet, but he announced he wouldn’t be slotting in some €500 million of Exchequer money originally earmarked for this particular piggy bank.

This non-saving will allow the Minister to create a €1.2 billion package of schemes to help Brexit-exposed sectors mitigate financial disaster. Food companies, for example, will be given assistance as they “re-orient” towards new products and markets, while support for beef farmers in the “first priority” beef sector is set to be, well, beefed up.

“Brexit is a great challenge. But our country will grow and our economy will develop. Budget 2020 aims to make progress on much, at a time of risk, but also at a time of opportunity. It invests in our future, while meeting the needs of today.”

Donohoe’s speech was low on “opportunities”, with the word popping up just four times compared to 13 outings for the less benign-sounding “risk”. The word “change” was not quite a constant, but it was mentioned 23 times, while “climate” appeared on 18 occasions. “Unprecedented” or “without precedent” snuck in a worrying six times and the standard political euphemism “challenge” was deployed 15 times.

“Sustainable” and “sustainability” cropped up in nine instances, while “ready” was in there a confident six times. None of these came close to the “B” word: Brexit reared its unprecedented head a total of 41 times.

“Turning to our taxation system, I will not commit to across the board personal tax cuts at this time of economic uncertainty as to do so could potentially undermine the sustainability of our public finances. The unfunded tax cut of today is the unwelcome tax increase of tomorrow.”

New personal tax measures were conspicuous by their rarity, being more or less limited to a €100 increase in the home carer tax credit and a €150 rise in the self-employed earned income credit.

In a confusing break from pre-election budget form, the Minister said he wanted to “avoid a situation in which decisions made this year might be reversed in the future”. His decision not to adjust the standard rate tax band in line with wage inflation means some workers who recently received pay increases may be pulled into the higher tax band, but it seems Brexit-vulnerable businesses and the health service just had the stronger call this year.

“In the wider housing market there has been an 82 per cent increase in new dwelling completions between 2016 and 2018. As a result, house price increases are moderating. Government policies are helping but more needs to be done.”

An allocation of €2.5 billion to housing in 2020 represents an “unprecedented” level of investment, the Minister for Finance claimed, though the phrase “coming from a low base” certainly sprung to mind when he cited the 82 per cent rise in new home completions between 2016 and 2018.

There are some who will also dispute the link between moderating house prices and building levels, believing the former has more to do with Central Bank lending rules and the fact that consumer confidence has waned to a six-year low. This was the section of Donohoe’s speech that triggered the most discernible signs of life from the rather respectful opposition benches.

“Few, Ceann Comhairle, expected this Dáil to pass a third budget. Those hardy few predicting a fourth would hardly have predicted one such as this. Yet, here we are. We have shown that the centre of Irish politics can not only hold, but adapt and change.”

After rattling through various measures on microbreweries, bookmakers, electric vehicles, urban cycling, “Global Ireland 2025” and the annual 50 cents excise hike on a pack of 20 cigarettes, it was time for the Minister’s concluding remarks, which touched on what used to be called the “new politics” and included a moment of self-congratulation for having got this far.

Then Budget 2020 was duly commended to the house, there was a handshake from the adjacent Taoiseach, and it was time for a little sit-down before the costly headache of the Brexit coping project begins in earnest.