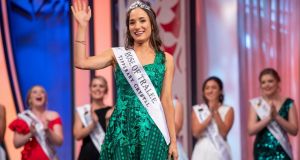 The 2019 Rose of Tralee is the favourite, Limerick Rose Sinead Flanagan.

Ms Flanagan grew up in Mungret and now lives in Adare, Co Limerick.

She revealed that she attended the same school, Crescent College, as the winner of TV show Love Island, Greg O’Shea.

“It’s Limerick’s year,” she said. “We’ve had the All-Ireland, the league, the Munster final, the Rose of Tralee and of course Love Island.”

She described the festival as representing “modern Irish women” who are highly educated and have a few life experiences.”

She qualified as a physiotherapist at the University of Limerick and then spent another four years qualifying to be a doctor in University College Cork.

She confessed to having a problem telling her right from her left, but as a doctor hopes to specialise in infectious diseases.

Big win for the Rossies tonight at #RoseofTralee! #Limerick Rose Sinead Flanagan is daughter of .@padflanagan22, a proud Elphin man and mad Rossie! Padraig and Sinead are pictured here at this year's Connacht Final in Salthill. Great year for the Flanagans! Congrats! Up the Ros! pic.twitter.com/Vh8K644qhh

She is the second doctor in the last five years to have won. The 2015 Rose of Tralee Elysha Brennan was a medical student when she won and recently qualified as a doctor.

Ms Flanagan spent a month volunteering in rural Ghana at the Methodist Faith Healing Hospital, an experience she found to be inspiring.

“They have done with so little compared to what we have here. It really stayed with me afterwards.”

In a year dominated by novelty party pieces, Ohio Rose Danielle Goebel demonstrated another one by opening a bottle of wine by putting it into a boot and banging it against a table.

Donegal Rose Chloe Kennedy, who was one of the earliest favourites, spoke of recovering from cancer.

She began with a direct riposte to Rose of Tralee host Dáithí Ó Sé who suggested the festival empowered women.

Ms Keogh said she had “never heard such bulls**t” and that the idea it empowered women was a “complete oversell”.

She asked: “Where is the body diversity. Will you see any fat roses?”.

She also questioned on the programme on Monday where were the Roses from the Travelling community, the homeless and from direct provision. “It does not represent modern Ireland, “ she said.

She also asked why the women who do not have degrees are not represented in the live final.

Ms Maher (22), defending the festival on Tuesday in Tralee responded: “I don’t have a degree, I haven’t set foot in college yet”.

The Waterford Rose is from a diverse family background. Her father is a former Zambian army officer; her mother is from Waterford.

“She (Ms Keogh) is attention-seeking ... I think it is really nasty and her views are wrong,” she said.

“There are girls of all shapes and sizes if you watched it. There are families from all over the world. You have different backgrounds so obviously she didn’t turn on her television. If you didn’t laugh, you’d cry.”