iPads in schools: a blessing or curse?

A debate is raging over the rights and wrongs of using digital technology to learn. But experts say there is a middle ground 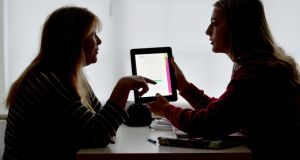 At Ratoath College, a 1,000-pupil secondary school in Co Meath, hundreds of parents are locked into a bitter row with school management over its iPad-only policy for junior cycle students.

On the one side of the divide is a large group of parents who say they are worried about too much screen time and fear the approach is harming their children’s education.

On the other is the school, along with some less vocal parents, who say digital technology is crucial to preparing children for the modern world.

Ratoath, however, is a microcosm of a debate raging across the country. The rights and wrongs of iPads, smartphones and other tablets or computers in the classroom has become a hotly contested issue.

Feelings run unusually high over the issue, with over 100 teachers, researchers, parents and students responding to an Irish Times tweet asking people for their views on digital technology: some of the rows became ugly enough for people to block each other online.

The Department of Education takes a largely hands-off approach to how schools use digital technology.

Both sides of the iPad debate point to studies which either support or question the use of tech in the classroom.

So for parents and educators, all of whom want the best for young people, it can be extremely difficult to figure out what’s best.

Parents are also put out over the cost of the devices, which can hit up to €1,000 when ebooks are added in, and many are unimpressed with the advice from schools that they get a credit union loan (see panel at end of piece). So, is there a middleground?

Dr Ann Marcus-Quinn is a lecturer in instructional design and e-learning at the University of Limerick and, along with Dr Tríona Hourigan (an ICT researcher and now a post-primary teacher), was one of two Irish researchers involved in what has become known as the Stavanger Declaration.

This document, signed by over 100 scientists and based on a meta-study (or study of studies) of 54 different pieces of research, concluded that “the transition from paper to digital is not neutral” and that “comprehension of long-form informational text is stronger when read on paper than on screens, particularly when the reader is under time-pressure” (as, of course, secondary school students are, especially in the run-up to exams).

The study also found that “contrary to expectations about ‘digital natives’, such screen inferiority effects compared to paper have increased rather than decreased over time, regardless of age group and of prior experience with digital environments”.

Scientists involved in Stavanger also found that students who read printed novels felt more immersion in the text and empathy for the characters than groups who read them in electronic format.

Does this mean the case is closed and paper books are preferred? It’s not as simple as that, says Marcus-Quinn.

“The problem is when a school takes a directive approach. If they are using tablets, they won’t work for every single subject. Schools need to think carefully about why they are choosing the tablet and what advantage it will afford. If they’re not using ebooks, we need to look at the content they are using rather than focus on the device.”

Donncha Ó Treasaigh was until recently the principal of Gaelcholáiste Luimnigh, one of just two “Apple-distinguished” schools in Ireland.

“Good management and engagement with parents, teachers and students, however, is key to the rollout of successful digital technology policy in schools,” says Ó Treasaigh.

He is now the director of schools for the Limerick-Clare Education and Training Board (ETB).

“Schools need to engage with students and communicate regularly with parents and support staff in the expectations of how best to promote learning with technology as part of a clear vision for learning in,” he says.

Marcus-Quinn is also concerned that not enough teachers are being adequately trained in instructional design, a worry also reflected by several parents and teachers we spoke to, including Ó Treasaigh.

“If untrained teachers are being asked to create their own resources instead of using textbooks, much of this is done in a piecemeal manner and means that students are given information that is presented without the context of a textbook,” says Marcus-Quinn.

“My doctoral research found that a whole school approach to tech doesn’t work: the decision should lie with individual teachers. And you can, for instance, have rich interactive content from history and English, but it mighn’t be as useful for science-based subjects.”

Marcus-Quinn’s research shows both the benefits and limitations of digital technology. “It is not an either/or,” she says, pointing to the hallowed middle ground. “An indiscriminate swap of textbooks for digital technology is not the best thing, but the technology can be used to bring in enhanced audio, multimedia or changes to the size and colour of the text.”

Indeed, for some students, digital technology has given them access to an education they may otherwise have been denied.

Caroline Broderick’s son, Benat, has cystic fibrosis. “Because of this he has to spend a lot of time in hospital and is unable to attend school,” she says. “Now, he can join in online and submit his school work by email.”

Other parents and teachers shared the view that digital technology can be particularly effective for students with different learning needs – whether that’s through apps or through additional functionalities on ebooks.

Teachers in Gaelscoileanna added that they have been a game-changer for Irish-medium schools, allowing them to create content that would not otherwise exist in Irish.

And a significant number of teachers said that digital technology is increasingly indispensable for the classroom-based assessments carried out at junior cycle.

Eric Ehigie, a sixth-year student in Longford, said he and his brother prefer the iPad because it’s lighter and more fun.

One parent shelled out €399 for the iPad but, when ebooks and a paper version of those books were added, it came to €840

Eiman Elsir, a TY student in Kildare, said iPads have restrictions to stop inappropriate behaviour during school, with teachers being alerted when students try to access banned apps or sites.

“I did find it hard to hard to study during exams because I had access to the internet and games right in front of me, but new developments are adding more restrictions,” she said.

“But there are so many resources online, such as maths tutorials or online flash cards. They can offer so much that physical books do not.”

It adds up: the cost of digital technology

While many parents have iPads or other tablets at home, most schools insist on using modified devices sourced through third-party suppliers such as Wriggle.

The most recent Barnardos school costs survey estimated that books for a first-year student cost €215.

But tablets can be a multiple of this with, in some cases, an iPad, protective cover, insurance and ebooks adding up to €1,000.

Parents who contacted The Irish Times say costs can vary significantly from one school to another.

One parent shelled out €399 for the iPad but, when ebooks and a paper version of those books were added, it came to €840.

In another school, an iPad and ebooks came to €750. Many schools mandate both ebooks and a paper copy.

Android devices are cheaper but haven’t really taken off, with several educators citing the support that Apple provides.

Other schools, including Crana College in Buncrana, Co Donegal, use Google Chromebooks as viable and cheaper alternatives.

“Chromebooks, unlike iPads, are seen by students as purely an educational tool, and we have control over the content,” says school principal Kevin Cooley. “At around €250 each, they’re cheaper than iPads.”