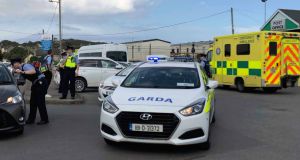 Gardaí at the scene of the fatal shooting in Clogherhead, Co Louth. Photograph: Ciara Wilkinson

A man has died after having been shot in Clogherhead, Co Louth this Tuesday afternoon in a suspected feud-related attack.

Gardaí and emergency services rushed to the scene following the shooting at around 2.50pm. The man, who is aged in his 30s, was given emergency first aid but was pronounced dead at the scene a short time later.

He is believed to have been from Drogheda originally.

The scene has been sealed off for examination and investigations are continuing.

The shooting took place at a caravan park near a supermarket on the Termonfeckin to Clogherhead Road.

It is understood several shots were fired from a passing car in the direction of a mobile home.

There is a popular and busy shop beside the caravan park and locals expressed their deep shock at such an incident happening in what is traditionally a quiet and safe holiday village.

One local said, “it is bringing unwanted attention to a very very quiet area. I moved up here years ago and you don’t see anything like this here. Everybody here says hello, goodbye, how are you doing. ”

The dead man has not been officially named. He is believed to be an associate of one of the main figures of the ongoing gang feud in nearby Drogheda.

“An incident room has been established at Drogheda Garda Station. Gardaí are appealing for anyone with information to come forward, particularly anyone who may have noticed anything suspicious in the Clogherhead area earlier today,” a garda spokesman said.

There have been more than 70 feud incidents since the first victim was shot last July. These include beatings, shootings, petrol bombings and other forms of arson, and incidents in which explosive devices were planted.

If today’s murder proves to be feud-related it will be the first fatality resulting from the violence.

Gardaí have recently stepped up armed patrols in the area.