Join us for a site tour of the 2019 Electric Picnic and check out some of the new festival features such as Freetown, Spike Island and The Cabaret. Video: Bryan O’Brien 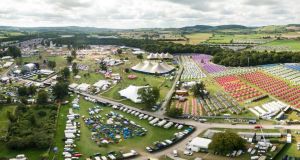 Hozier, The Strokes, The 1975, Florence and the Machine and Billie Eilish are among the headliners at Stradbally in 2019. Photograph: Aerial.ie

Electric Picnic’s promoter has invoked the spirit of Extinction Rebellion in urging festival-goers to bring their tents home after this year’s event.

“Not enough people have been listening. This year I’ve really pushed that message . . . Take your tent away,” said Melvin Benn, managing director of Festival Republic, which also runs the Reading and Leeds festivals in the UK. He was speaking at a media tour of the Electric Picnic site at Stradbally, Co Laois ahead of the weekend’s festival.

Last year, bulldozers were required to dispose of some of the thousands of tents abandoned at Stradbally. Benn later said he was “appalled” by the number of people leaving behind camping equipment.

“Extinction Rebellion have really moved that debate on,” said Benn, referring to the radical environmental movement that has blocked traffic in Dublin, London and elsewhere to protest lack of action against climate change.

Hozier, The Strokes, The 1975, Florence and the Machine and Billie Eilish are among the headliners at Stradbally in 2019. This is to be the largest Electric Picnic yet with attendance raised by 2,500 to 57,500. The site has been expanded significantly with a new 12,500 capacity “Freetown” area created in the old Oscar Wilde campsite area (the Oscar Wild has been relocated).

“The new field is about eight or 10 acres. It comprises four or five different large scale pieces,” said Hugo Jellett, the designer of Freetown (and also of the existing Salty Dog and Trailer Park areas).

These include Spike Island, described by Jellett as a “Cajun-Bayou swamp hut”. Adjacent to this is a new 8,000 capacity dance tent, Terminus, and Providencia, a Latin America-themed area with DJs.

Sustainability was a message organisers were keen to get across at the media tour. Additional public water taps have been installed in the main arena. And rock stars – their identities yet to be revealed – have filmed short videos to be broadcast from the main stage in which they will plea with festival-goers to bring tents home.

Electric Picnic was the first Irish festival to make a virtue of quirkiness and that continues in 2019. A burlesque cabaret at Freetown will feature a freakshow performance artist who lies on beds of nails, hammers nails into his nose and lifts beer kegs using only his genitals.

Additional wackiness will meanwhile be served at a “Who Let the Dads Out” area at Trailer Park. Among other diversions it will feature “one-handed stroller” races for fathers.

As in previous years, Electric Picnic 2019 sold out before the line-up was even announced. The festival began in 2004 as a “boutique” event with a 10,000 capacity.

Melvin Benn doesn’t rule out raising the maximum attendance above 57,500 in the future.

“There seems to be demand,” he said. “I’d like to respond to that demand. I’ll make an assessment after this year’s festival.”