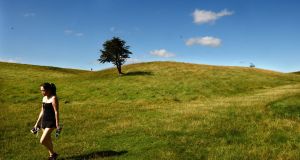 Sunny weather in the Phoenix Park, Dublin, earlier this week. The weekend is expected to be rainy and windy. Photograph: Dara Mac Dónaill

Met Eireann has issued a weather warning for the western half of the country with persistent rain forecast throughout Friday.

Between 25 and 50mm of rain is expected in 10 counties comprising of all of Connacht, Donegal, Clare, Cork, Kerry and Limerick. In mountainous areas rainfall could be even higher.

A yellow weather warning is in place from 6am on Friday morning to 6am on Sunday morning.

Mayo County Council issued two flooding alerts on Friday afternoon; a level 3 alert for Crossmolina due to heavy rainfall in the River Deel, and a level 2 alert for the rest of the county.

The alerts will remain in place until Saturday, the council said, with anticipted rainfall levels of up to 50mm expected.

Meanwhile, two SSE Airtricity League Premier Division fixtures have been postponed. The games, between Finn Harps and St Patrick’s Athletic, and between Galway United and Limerick, were postponed due to waterlogged pitches.

Forecaster John Eagleton says some places will see between 24 and 36 hours of persistent rain from midnight on Friday until midday on Saturday. The rain may not be heavy, he added, but it will be continuous in some places.

Fortunately for the 57,000 fans attending the Electric Picnic, the heavy rain is likely to pass it by although there is a possibility of showers over the site in Stradbally, Co Laois, in the early hours of Saturday morning.

For the weekend, there is likely to be an east-west split in the country with the east staying mostly dry for Friday and Saturday.

It looks like the heavy rain will clear away on Saturday afternoon giving way to dry, blustery conditions across the country.

Sunday will be a fresh and cool day with sunny spells and scattered showers. Some of the showers will be heavy, especially in the northwest. The forecast is uncertain for Sunday’s All-Ireland final between Dublin and Kerry.

In Dublin’s Croke Park on Sunday, forecasted showers will be broken-up with periods of “bright and cool” conditions.