Review: The singer takes to his biggest stage yet. Money or hype can’t buy what he has 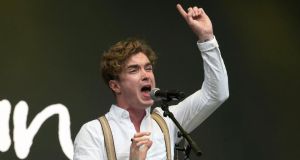 Main stage
As Irish as a game of hurling and as smart as a fox, David Keenan is playing on the biggest stage of his career so far – and he is, frankly, licking his lips like a bunch of Cheshire cats after a dozen slurps of cream.

In other words, the size of the stage suits him: the Dundalk man can’t help but revel in the occasion (and it so happens it’s his birthday, which is surely the congratulatory cherry on the cake).

The clincher, of course, is Keenan himself. We have seen him on tiny stages, also, and both there and here he shows no fear or inhibition. “Are we not delirious?” he sings imperiously during his brazen walkabout off the stage and across the barriers close to the ever-growing crowd.

A tad OTT? Perhaps, but the man connects. Money or PR hype can’t buy that.