How to understand China: Step one, forget about God

Unthinkable: Despite very different religious traditions, the Irish and the Chinese are similar in their thinking, says Jerusha McCormack 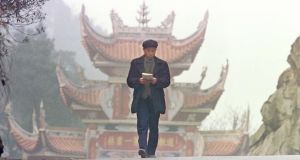 ‘If God is set aside, all of Western thinking going back to Plato and Aristotle and the Church fathers who adapted their thinking to Christianity is also eliminated.’ File photograph: Will Burgess/Reuters

What would western civilisation be like had Christianity never materialised? China may provide a clue.

Here is a land where there’s no reference to God in the mainstream culture. There’s no division between believers and non-believers. This has radical implications not just for the nature of public discourse but for private understanding of one’s purpose in life.

As Chinese cultural scholar and author Jerusha McCormack says: “If God is up there, he is the creator of everything. We owe him our existence and he is the creator in us of an immortal soul. There is no such thing in China.”

In Chinese society, no one is an end in themselves; you are a means to an end

A former English professor at UCD now teaching at Beijing Foreign Studies University, McCormack says Chinese culture can seem strange and alien to Westerners, but “if you’re open to it” you can see commonalities. The Chinese and the Irish are particularly close in their way of thinking, she argues, although – it must be said – this doesn’t cast either population in an entirely positive light.

The American-born academic recalls moving to Ireland in the 1970s and becoming “completely frustrated” as “I could never seem to get a straight answer to a straight question”. Eventually, her husband gave her a copy of The Best of Myles. “And once I had read that I understood. That Myles na Gopaleen was really quite Chinese in his approach: good at refining cliches; like most art, a question of working around theme and variations, avoiding the hard questions.”

A new book edited by McCormack, The Irish and China (New Island), is being launched on Thursday at TCD. In advance, she spoke to Unthinkable.

You say in most of the Chinese world there is no God. How does this make their thinking differ from ours?
Jerusha McCormack: “If God is set aside, all of Western thinking going back to Plato and Aristotle and the Church fathers who adapted their thinking to Christianity is also eliminated.

“If you eliminate that whole transcendental world of categories which we teach children here – that there are two worlds: one of categories and first principles, the other of actual experience – then you are able to imagine a Chinese world, one in which there is no second invisible world of stable, transcendental entities.”

How is personal identity understood, then?
“The word for ‘human’ in China is a character that combines the sign for ‘person’ with that of the number ‘two’. What this implies is that you can never achieve personhood on your own, but only through relations with others.

“It is the quality of such relationships that define you as a person, not something you were born with, such as a unique soul. And the same goes with human rights . . . Human rights in China all tend to be collective, social rights: the right to housing, for instance. They all have to do with a collective ‘we’ within society.”

Under this way of thinking, has human life a value outside of the collective?
“In Chinese society, no one is an end in themselves; you are a means to an end. The view of personhood is that the person is valuable in so far as they are in a relation to others. You are someone’s child, someone’s wife or husband, someone’s friend. That is your value.

“There is not necessarily any a priori value in that life, and that is why you are very quickly brought into relationship with others.”

You see parallels between Chinese and Irish thinking, or more accurately Chinese and Irish thinkers.
“I do, depending on what you mean by thinking. Perhaps our greatest philosopher, John Scotus Eriugena (810-880) is a very interesting example. He comes to Christian theology at a time in Ireland when it is barely Christianised, at a time when Celtic Christianity still had many of the old druidic elements, which I think of as Chinese and, specifically, Daoist. It’s a world without god, a world in which there is no transcendental universe, where the gods are only known through the shifting energies of nature.

“The druids understood nature as a force that was sacred, and that’s how John Scotus understands nature. In fact, in his writings, he uses the words God and nature almost interchangeably.

“John Scotus talks about nature in a Daoist sense: as one huge unity and a process:  a godlike force moves through it. His God is totally imminent, immersed in this world. In essence, John Scotus is trying to imagine a Christian theology that is more flowing and supple and immediate than the one he inherited from the Church fathers. But in doing so, he tends to subvert much of western transcendental thinking.

“And of course he is followed about 900 years later by Bishop Berkeley who said, we Irish don’t go in for this large, analytical and deductive, abstract kind of thinking; we go in for what our senses tell us, that nothing exists unless it is perceived. In other words, we live in this phenomenal world that actually doesn’t exist except for our consciousness of it – which is a very modern way of thinking.

The Irish are very good at debate even though, in the Irish language, there was never a word for yes or no

“Oscar Wilde, whom I also regard as an Irish thinker, turns out to be a kind of spiritual companion to the Daoist philosopher Zhuangzi, whom he read just before he became famous as a writer. Wilde, like many Chinese sages, tends to think in terms of sentences or aphorisms. And he tells stories.

“For that reason critics sometimes say the Irish – like the Chinese – can’t think. They do think, but tend to think differently.

“The Irish are very good at debate even though, in the Irish language, there was never a word for yes or no. And, in a social situation, what do the Irish do when they disagree? Avoid confrontation.

“They would perhaps subvert the issue with a joke and that would be a way of social bonding. Or they would change the subject, and then they’d try to persuade you quietly behind your back . . . They understand that debates must end in a kind of consensus.

“I think in that way again the Irish are very close to the Chinese, because what matters in the end is the relationship and they don’t really want to give answers that might contradict and therefore offend you.”

The Irish and China: Encounters and Exchanges (New Island), edited by Jerusha McCormack, is being launched at the Trinity Long Room Hub, TCD at 6.15pm on Thursday October 10th. More details: https://www.tcd.ie/Asian/events/