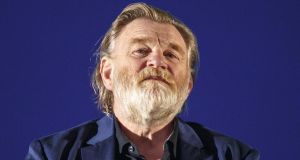 Brendan Gleeson will play Donald Trump opposite Jeff Daniels, as James Comey, in a TV adaptation of the former FBI director’s memoir, A Higher Loyalty, it has been announced.

“It’s hard to imagine a bigger acting challenge than playing Donald Trump. You have to have presence, and a singular kind of dynamism. You also have to have the courage and the will to play Trump’s psychology from the inside out.

“Oh, and you have to be spectacularly talented and watchable. Not many actors check all those boxes. Brendan does. I’m ecstatic about this,” Billy Ray, who adapted the book and will direct the miniseries for the American network CBS, told Deadline.

Trump fired Comey as FBI director in May 2017, a move inextricably linked to Robert Mueller’s inquiry into Russian interference in the US presidential election of 2016 and links between Trump and Moscow that the former White House strategist Steve Bannon calls, in a forthcoming book, “maybe” the biggest mistake “in modern political history”.

Comey has become a stringent public critic of the president with an active Twitter presence.

A Higher Loyalty, published in April 2018, deals with the author’s early career in the FBI, his experiences under George W Bush and Barack Obama, his hugely controversial stewardship of the investigation of Hillary Clinton’s emails amid the 2016 election and his brief but tumultuous service under Trump.

Comey characterised Trump’s expectation of personal loyalty, as on a par with that of a Mafia don, writing that a Trump demand was like a “Cosa Nostra induction ceremony – with Trump in the role of the family boss, asking me if I have what it takes to be a ‘made man’.”

“Jeff is so perfect for this part,” Ray said. “Great actor, instant integrity, loads of warmth, intelligence, complexity and gravitas. We talked backstage after I saw him in To Kill a Mockingbird on Broadway, and I knew I was looking at the only person who could play Jim Comey. Lucky for me, he said yes.”

CBS bought the rights to Comey’s book after a bidding war last year. Deadline reported on Monday that filming on the miniseries will begin in November, after Daniels finishes his year-long Broadway run in Aaron Sorkin’s hit adaptation of Harper Lee’s classic novel. An air date has yet to be announced.

The TV version of Comey’s hit Trump book is not alone. The Emmy-winning director Jay Roach, for example, is attached to the screen version of Fire and Fury: Inside the Trump White House, a tell-all by Michael Wolff.