Gemini Man: Will Smith battles with his digitally recreated, de-aged self 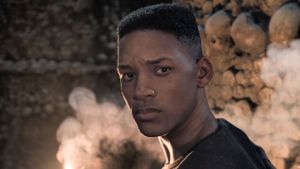 Will Smith in Gemini Man

De-ageing and deepfaking is a big frontier for film, with Martin Scorsese’s The Irishman, featuring a young Robert De Niro, co-hitting cinemas soon. The makers of Gemini Man – primarily director Ang Lee and producer Jerry Bruckheimer, the man behind such mega-hits as Top Gun and Flashdance – tested out Scorsese’s de-aging tech and found it wanting.

Thus, they digitally recreated, thanks to motion capture, a younger, Fresh Prince of Bel Air-era Will Smith to do battle with his 50-year-old equivalent.

That’s the pitch for this high concept sci-fi actioner: longtime and effective assassin retires but accidentally intrudes on some skulduggery, leaving his former employers to dispatch a cloned, younger version to track him down. Along the way, older Will Smith teams up with Mary Elisabeth Winstead. Meanwhile, younger Will Smith has adopted dad and handler Clive Owen at his back.

A four-minute tussle between the pair is impressive but for all the vanguard specs, you can’t help but feel that this is the film Jerry Bruckheimer and Will Smith ought to have made sometime between Enemy of the State and Bad Boys. Gemini Man! The second biggest blockbuster of 1999!

For all that, there’s a peachy nostalgic fuzz around the enterprise. Bruckheimer, as history records, changed cinema with such big gambles as Top Gun and Pirates of the Caribbean. Nowadays, anything made outside major franchises and comic books looks positively quaint and more than a little reckless.

Arriving in between the buck-hoovering Aladdin and the incoming Bad Boys 4 Life, Gemini Man is a timely reminder that Will Smith has star wattage, even after he has spent years trying our collective patience. Collateral Beauty, anyone?

But it might just be marvellous to see Lee and his former screenwriter James Schamus get back together for more films like The Ice Storm and Brokeback Mountain.